maltagc70 is a complete diary of the siege from June 1940 to December 1942.  Your first visit? CLICK HERE   And for daily updates direct to your computer – sign up to follow maltagc70 (see R)

“I had to get the bombs out.  I couldn’t carry them: depending as they did on vibration to explode, they could go off and destroy me…” (1)

The city of Valletta was at a standstill this morning as the centre was cordoned off by the civil defence authorities.  According to the police, large numbers of unexploded bombs have been reported across a wide area of the city.  The Royal Engineers Bomb Disposal Officer has warned that the bombs are extremely sensitive to disturbance and ordered that no-one is to enter the closed areas until they have been cleared.  Lt George Carroll explained:

“When a new type of bomb was discovered, all bomb disposal officers were notified.  I [had been] informed that the Italians were dropping ‘Thermos flask’ bombs – so called because they resembled the Thermos in size and appearance.  They were designed for attacks on aerodromes, for example, so that people working on aircraft would experience explosions without warning, which would be very frightening. These bombs were intended to drop in the dusty airfields of North Africa, where they could lie undetected but affected by vibration, go off unexpectedly later. But they didn’t drop them on Hal Far or Ta Qali; they dropped them on Valletta.” (1) 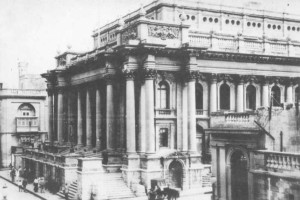 The ‘Thermos’ are dropped in canisters each containing several bombs; authorities expect many more could still lie undetected.   Not only could anyone stumble upon one by accident; their appearance could attract the interest of innocent civilians, especially the young, who might pick them up with fatal consequences.  According to early reports, three civilians have already been killed by the bombs, including two teenagers.

“As the Bomb Disposal Officer responsible for protecting the civilian population, I informed the police of this and told them to let the local people know that if they came across anything resembling a Thermos flask they must leave it alone and report it to the police, who would inform me.  Not long afterwards, the police contacted me to the effect that they had something like sixteen of them in the basement of the Opera House, which was their police station.  I had to get the bombs out.  I couldn’t carry them: depending as they did on vibration to explode, they could go off and destroy me…” (1)