“Many of these fine men and their ships were lost but the memory of their conduct will remain an inspiration to all who were privileged to sail with them.”  E N Syfret, Vice-Admiral, Flag Officer Commanding, Operation Pedestal 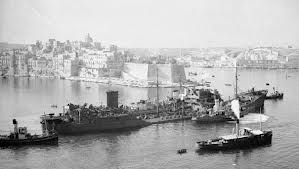 After an epic struggle by her gallant Master and escorts, SS Ohio entered Malta’s Grand Harbour at 0755 hours on 15 August 1942.  After a traumatic twenty four hours under tow, the slowly sinking tanker was eased into safe waters, where she finally settled on the bottom with the majority of her fuel cargo intact and available.  Ohio was the last of five supply ships to make harbour, following SS Port Chalmers, Melbourne Star and Rochester Castle on 13 August and Brisbane Star, holed in her bows and with many of her crew wounded, who arrived on the afternoon of 14 August.

That the few surviving convoy ships did make their goal is a tribute to the resolution shown by all concerned.  Special praise went to the Master of the Ohio (Captain D W Mason), Penn (Lieutenant-Commander J H Swain, RN), Ledbury (Lieutenant-commander R P Hill, RN) and Bramham (Lieutenant E F Baines, RN), to the Malta local forces, and to the Royal Air Force based on Malta.

By 22 August 32000 tons of supplies had been unloaded and taken to secret supply dumps across the Island.  The Island now had enough food to last just three months.  But the massive losses the enemy had inflicted on the convoy proved that the siege of Malta was far from over.

“As I recall we left Scapa in early August ’42…in company with our sister ship Nelson, and headed south being joined by other ships both naval and merchant as we proceeded. As was common practise in those days we had no idea of our destination And as always in the absence of positive information rumour ran riot. The Far East seemed to be the popular lower deck choice until we reached the 36th parallel when it was left hand down and hey ho for the Straits of Gibraltar. There was much excitement at the thought of a run ashore in Gib. But it was not to be — in the middle of the night of 10th August we belted through the Straits in the forlorn hope of not being spotted by the enemy watchers on either side… 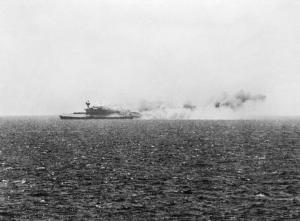 With Gibraltar well behind us the Skipper (Captain J W Rivett-Carnac DSC RN) addressed the ship’s company. He confirmed that the destination of the convoy was Malta, told us that if the convoy did not get through then Malta would undoubtedly have to surrender. Explained that the importance of the convoy would be well noted by the enemy, spelt out the potential opposition and advised that the next few days would be very interesting. It was a most inspirational speech delivered by a very popular and much respected Captain. We did not have long to wait for the ‘interest’ to develop. About an hour later he was on the ‘blower’ again with the comment ‘looks as if the Eagle has been torpedoed off our port quarter’. We all dashed to the upper deck and there was Eagle, flight deck already touching the water and a few minutes later she vanished from view. Apart from the sorrow at losing a great ship we had also lost a third of our air cover. Fortunately, most of the crew had been rescued by the escorting destroyers but the submarine (U73, Lt. Rosenbaum) had escaped…

Shortly after that we went to action stations where, apart from a few brief lulls, we remained for the next 3 days. What of the ‘Flight’ you may ask – I wish you wouldn’t. Our first action was to defuel the Walrus much to the relief of the Royal Marines manning X turret who did not relish the thought of gallons of high octane aviation spirit pouring through their air vents…The action, when it started, was a fairly gentlemanly affair with a few high level bombing and submarine attacks. But on the second day things got really hectic with combined high level bombing, torpedo bombing, dive bombing and submarine attacks. The action diary for this day as recorded by Kenneth Thompson, the ship’s Chaplain in his book ‘HMS Rodney at war’:

…Whenever possible I made my way to the upper deck to observe the operation of our two remaining carriers, Indomitable and Victorious. With the convoy under constant air attack from dawn to dusk there was continual flight deck activity. It must be remembered that fresh aircrew manned each succeeding wave of enemy aircraft whereas our small band of pilots were continuously in action…It was possibly the most concentrated period of action in the annals of the Fleet Air Arm…the performance of those young Naval aviators is deserving of the highest praise. 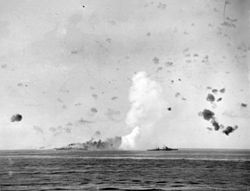 I had many friends in both ships and was well aware of the intense activity that was taking place both on the deck and in the crowded hangar below… [then] disaster struck Indomitable. Two large bombs through the flight deck, within seconds the ship was engulfed in flame and smoke but through it all the ack ack barrage was maintained – a remarkable and courageous performance but the ship was now out of action as an aircraft carrier. With many of Indomitable‘s aircraft airborne and now only one deck available Victorious there was a landing problem. ‘Vic‘ already had a full complement of aircraft plus some from Eagle so space was at a premium and we were forced to witness the very sad sight of aircraft landing, crew evacuating and then the deck party manhandling the aircraft back over the round-down into the sea in order to make room for the next to land…

As we approached the area known as the Skerki Narrows (Bomb Alley to the sailors), between Sicily and Cape Bon, the heavy units had to withdraw leaving the convoy in the care of the escorting cruisers and destroyers with air cover from Malta. This was the most hazardous part of the journey with E boats added to the enemy forces in opposition. We were escorting the damaged Indomitable back to Gibraltar. A typical Mediterranean evening, the sea flat calm, the sun still high in a clear blue sky and the silence was sheer bliss after the deafening clangour of the previous few days. Suddenly we could feel the ship losing speed, the flag was lowered to half-mast and our attention drawn to Indomitable. From the stern of the ship we could see bundles toppling into the sea as ‘Indom‘ buried her dead. There were some 50 of them – a sight that remains vivid in my memory to this day…

This is my small tribute to those hundreds of seamen of the Royal and Merchant navies and the airmen of the Fleet Air Arm who did not return from Pedestal.”  From the memoirs of Commander William L Myers, RN (Rtd), contributed by Lesley Myers to BBC WW2 People’s War (1)

“As the holder of the AA gunner’s ticket my action station was on a machine gun on the boat deck. The severity and continuity of the air attacks that followed was ferocious with a capital F. You just stayed at action stations you didn’t have time for anything and you didn’t sleep. Wherever you pointed the gun there was an enemy plane and you just kept pulling the trigger except when you were re-loading. The sky was like a huge lace curtain with the shell bursts from close to a hundred ships and it just stayed that way. Bombs were raining down and planes were falling out of the sky and ships disappearing in a flash of blue light. Many of the ships were carrying aviation fuel in drums in the ‘tween decks and how that reacted to a torpedo or a bomb I will leave to the reader’s imagination. And near misses were two a penny…

On 12th August we copped it. Around 6.00 p.m. while I was trying to shoot down aircraft a torpedo struck Ohio in the summer tanks, loaded with kerosene. With a 24 foot by 27 foot gash in her side, tank lids flying off, flames shooting mast high, a fountain of kerosene soaked me at my gun on the boat deck.  What happened next I don’t know but when reality hit I was in the oggin, bobbing up and down in my life jacket complete with red light and whistle. I can’t swim and watching ships steam past without even a wave didn’t do anything for my morale. I soon felt a bit better – but not much! – when I realised there were three others in the water in close proximity, one of them Mario, the galley boy. By this time the convoy was disappearing in the distance. But we weren’t alone for long enemy planes flew over and used us for target practice. Fortunately their bullets missed.

After about three hours of bobbing aimlessly about in the drink a destroyer came in sight and headed for us…”  Ray Morton, Merchant Navy, memories of Operation Pedestal – see website 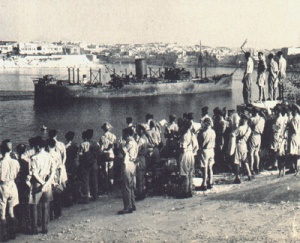 “WE WERE A SITTING TARGET” – LAST HOURS OF TANKER’S JOURNEY

“Seven planes appeared above and we shouted to the bridge who thought they were Spitfires and told us so. The ‘Spitfires’ banked and screamed down narrowly missing us with bombs but one hit the Ohio square on the stern. We really thought the whole damn lot of us were going to blow up, but our luck held. Thank God! The attack was so sudden that B gun only fired eight rounds. It was getting dusk and the planes were able to get gloriously close to us without being seen. We saw one going away which appeared to be badly damaged…

All that day we were left alone, this being due to the fighter escort from Malta.  We sighted the Island at 1930 and hoped we would make it that night. But we were informed that we would not arrive till next morning. So it was at 0800 the next day we steamed through the breakwater into the Grand Harbour at Malta. Two ships, small destroyers, of only 1600 tons, with an oil tanker between them had safely brought the last ship of the convoy safely to its destination. The people of Valletta lined the harbour to cheer us, and the military band played ‘Hearts of Oak’ as we entered, making us feel very fed up because we did not ask for praise. We had only done what we set out to do.”  Memoirs of Ohio gunners R Cheetham and D Burke, WW2 People’s War (1)

(1)  WW2 People’s War is an online archive of wartime memories contributed by members of the public and gathered by the BBC. The archive can be found at bbc.co.uk/ww2peopleswar