maltagc70.com continues to add new stories about Malta in World War Two.  DON’T MISS OUT – sign up to follow maltagc70 (see R) and we’ll deliver direct to your inbox

“Whereas I have received information that War has broken out with Italy, I hereby announce to His Majesty’s Subjects in the Islands the outbreak of hostilities in humble trust in the guidance and protection of Divide Providence, and in assured confidence of the cordial support and tried fidelity and determination of the people of Malta.”  Lt Gen Dobbie, Acting Governor and Commander in Chief

At the first chimes of midnight last night, Malta’s churches announced the start of the second siege in the history of this fortress Island. Mussolini has declared the war on the side of the Axis.

“We woke at 06.45 to the scream of the air raid siren. It is not a scream really, but quite a melodious pair of notes – a major third, I think. But, since it rises from a low note to a high one, and then warbles up and down continuously in a chromatic scale, it give the impression of a shriek. Probably this is emphasised psychologically, by the fact that its warbling note means danger. Indeed when with its steady note it announces “Raiders passed” it has quite a pleasant sound.

… the siren practically synchronised with a furious outburst of anti-aircraft fire all around us. We hurried into dressing gowns, and ran to the Crypt collecting the two frightened maids as we went. The fire was severe; windows and doors rattling, and the crump of bombs falling.

There are three A.A. guns 600 yards away, clearly visible from our drawing-room windows, and indeed guns on all sides of us at about the same distance. I do not know how long the action lasted – perhaps 15 minutes. Ten planes, we are told, in two formations.

We had 8 raids [to]day, by far the worst being the last, when firing went on for about 30 minutes at about 7.30 p.m. It was a terrifying experience. I could hear bombs dropping. The sound is quite different from gunfire. It is a thick sound, and the word ‘crump’ just describes it.” (1)

Italian bombs fell near Fort Campbell, followed by near misses at St Georges and Tigne, and a direct hit on Fort St Elmo. Malta’s first military casualties were six members of the Royal Malta Artillery, would-be protectors of their Island.

Malta’s defences are minimal. The Island has fewer than 5000 ill-equipped troops, no operational fighter aircraft, only 14 coastal defence guns and food supplies sufficient for 6 weeks. 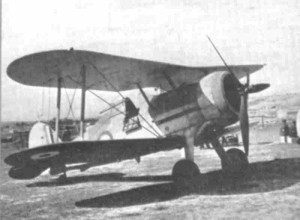 There are no air squadrons to call on – just four obsolete planes and a handful of volunteers barely trained to fly them. A fighter flight of three Sea Gladiators, historically named Faith, Hope and Charity, took to the air in a valiant effort to take on the Italian fighters. Flying Officer W J Woods found himself at about 15,000 feet, pursued by a Maachi 200:

“I suddenly heard machine-gun fire from behind me. I immediately went into a steep left-hand turn and saw a single-engine fighter diving and firing at me. For quite three minutes I circled as tightly as possible and got the enemy in my sight. I got in a good burst, full deflection shot, and he went down in a steep dive with black smoke pouring from his tail. I could not follow him down, but he appeared to go into the sea.”  (2)

Malta has claimed its first enemy fighter but not before the terror of air raids had struck the Island’s people.  More attacks soon followed causing civilian casualties across the Island, including six in one heavy bombing raid on Gzira.

0655-0751 hrs  Air raid alert.  Ten Italian SM79 bombers in two formations escorted by Macchi 200 fighters approach the Island at 14000 feet, crossing the coast over Kalafrana and Hal Far, and heading towards Grand Harbour.  Sixteen 250lb bombs are dropped on Hal Far, and another thirty between Fort Benghaisa and Birzebbugia.  Buses, a searchlight and vehicles on the aerodrome are damaged.  One aircraft carries out a low-flying attack on Fort St Elmo, dropping three bombs and killing six members of the Royal Malta Artillery.  Damage to the Dockyard is slight.  Enemy aircraft are engaged by fighters and two are reported shot down in the sea by Maltese gunners – one near Filfla and the second north of the Island.

1721 hrs  Two groups of five raiders cross the Island at 15000 feet.  One is shot down by Ack Ack fire and another by Malta Gladiator aircraft.

1945 hrs  One enemy airman is believed to have bailed out.  A patrol of 2nd Bn Royal Irish Fusiliers carries out a search in the Pembroke area but find nothing.  Motorboats spotted off Grand Harbour are identified as hostile and two are sunk.  The boats are later confirmed as friendly.  1st Bn Dorset Regiment rescue five of the crew.