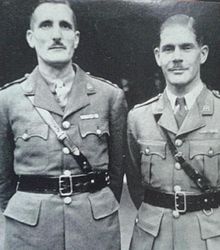 Malta’s first two bomb disposal officers have both been awarded the George Cross. The London Gazette made the official announcement of the awards to Captain R L Jephson Jones and Lieutenant W M Eastman, RAOC, which were made in recognition of their ‘most conspicuous gallantry in carrying out very hazardous work’.  According to the recommendation, the two officers:  “worked under dangerous and trying conditions and performed acts of considerable gallantry in dealing with large numbers of various unexploded bombs, some of which were in a highly dangerous state and of the German delay type.

On one occasion, these officers showed particular gallantry in dealing with an 1100lb (500kg) German bomb. Two attempts were made to explode this bomb but it failed to detonate; at the third attempt when it was in a most dangerous state, they succeeded in detonating it.  On a second occasion, these officers, assisted by a Master Rigger of H M Dockyard, succeeded in removing a 400lb high explosive Italian unexploded bomb which had been under water for a week in a 20ft deep well inside a house…”

Captain Jephson Jones and Lt Eastman with their Royal Engineers team tackled some 85 unexploded bombs and over 150 Ack Ack shells in the six months to November last year. With no formal training or specialist equipment available in Malta, they often had to improvise to get the job done.

In a further development today, the War Office issued a caution to Malta’s Governor and Commander in Chief to place a press embargo on any mention of the two officers dealing with time bombs in coverage of their awards. (1)

0810-1210 hrs  Glenn Martin photo-reconnaissance of Tripoli harbour from 10000 feet: three seaplanes near hangars; six destroyers, one merchant vessel 10000 tons, five of 8000 tons, seven of 6000 tons and eleven smaller.  Moderate to heavy Ack Ack encountered: fairly accurate.  Reconnaissance of Pantelleria: photos not taken due to 100 per cent cloud at 2300 feet over the island. 1429 hrs Sunderland from Gibraltar landed safely with nothing to report.