MNFU Hurricanes will be painted black

A new RAF unit dedicated to the defence of Malta at night is ready to begin operations. Led by former Battle of Britain flight commander Group Captain George Powell-Shedden, the Malta Night Fighter Unit will be based at Ta Qali. The unit has been formed to counter the frequent night raids by the Italian air force which have become increasingly intense in recent weeks.

The MNFU will have a special fleet of eight Hurricanes which will be painted entirely in black. As soon as an air raid is plotted approaching the Island, the fighters will be scrambled and the runway briefly illuminated to allow them to take off.  They will work in conjunction with the Island’s searchlights which will illuminate the raiders to enable the camouflaged Hurricanes to close in unseen for attack.

One of the surviving motor torpedo boats used on yesterday’s raids has been salvaged by the Royal Navy and examined for intelligence purposes. Leading the operation was Rendering Mines Safe Officer Lt Edward Dutton Woolley, GM, RN, who was called out on Saturday morning soon after the raid had been defeated.  The tug Justified took him to the Italian vessel which had been captured by the RAF seven miles offshore:

One of the prisoners captured, together with an interpreter, went with me as he had been persuaded into telling me how to render the thing safe when we found it. At least that was the idea.  When later on we came to the boat he just swore he didn’t know what it was, and that he’d never seen one before, so he wasn’t much use…

After about two hours steaming we came up to the derelict boat. Viewed through the glasses it was quite a small thing, about eighteen feet long and [looking just like] a racing motor boat…It appeared in good order but I could see a large steel case in the bows with a crimson flame painted on it which didn’t look very healthy, so I secured a line to the stem and got back to the ship without much hanging about, then took it in tow and started back for home.”

Commander Woolley chose a quiet sector of Manoel Island to beach the boat for further examination. The manoeuvre was a delicate one in view of the risk of explosion.  Finally he could examine the boat:

“When we got the deck cover off a most incredible contraption of pipes, wires and gadgets was disclosed, which was obviously the firing gear, so we lit cigarettes and pondered over it for a while. For a moment I had the same feeling again that I had when I saw my first mine – that I just couldn’t tackle it – and then again, just as before, the realisation that it had to be done by someone and it may as well be me.”

After working into the evening, Commander Woolley had determined how the mechanisms worked. He returned to the boat this morning to finish the job:

“The next morning, Sunday, saw the end of the dismantling with the detonators and primers out and the whole thing reasonably safe. There was the main charge of 600 lbs, two primers, three three-ounce charges and over forty detonators.  One of the detonators blew when I was taking it out and ripped my arm but that was the only damage.  Later investigation however showed that we had been very lucky taking the primers out, as one of them unscrewed itself as it came out.  Had the other done the same, the striker pin would have been released and the main charge would have exploded…

The main idea was that the pilot should direct the boat at a ship and then jump overboard before it hit and went up. A pretty suicidal job I should think…” (1)

1st Bn CHESHIRE REGIMENT  Arrangements were made to hand over the Sliema area to 11th Bn Lancashire Fusiliers.  C Company will receive personnel of 11th Lancs into their beach posts from tomorrow.  An area will be taken over by C Company from 2nd Bn Royal West Kent Regiment.  Training of 40 RAF personnel in the use of rifles began; there are 200 to be trained.

EVACUEES RETURN TO THREE CITIES WHILE OTHERS FLEE VALLETTA AND FLORIANA 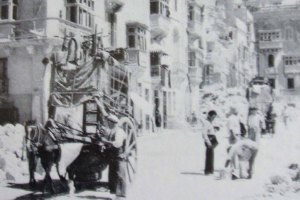 Thousands of Maltese are on the move again, thanks to the increase in air raid shelters in target areas on the Island. During the past month alone more than 3000 evacuees have returning to their homes either because of the new provision, or the promise of air raid shelter accommodation in their home district.  All areas around Grand Harbour have registered increases in population.  A total of 41 people have moved back to Cottonera, 397 to Paola and Tarxien; 366 to Zabbar and 669 to the Sliema area.

Meanwhile others are still leaving danger areas due to continuous sleepless nights caused by air raids. During the month 159 have fled to safety from Valletta and Floriana, both of which have recently heavily bombed recently. 1790 have left from Qormi and 402 from Balzan.  375 have found refuge in Birkirkara, 353 in Mellieha, 150 in Zurrieq and 131 in Zebbug. (1)

A new fighter squadron has been formed at Ta Qali today following the recent arrivals of new Hurricane aircraft on the Island. 126 Squadron will be led by Wing Commander Alexander C Rabagliati who arrived in Malta as part of Operation ‘Rocket’ on 6 June with other members of 46 Squadron, members of which will form the core of the new squadron.

W/Cdr Rabagliati has already been very active in fighter operations over Malta, having shared in the destruction of one SM79 and damaged two more, destroyed a CR42, destroyed one Macchi and damaged a second in just three weeks.