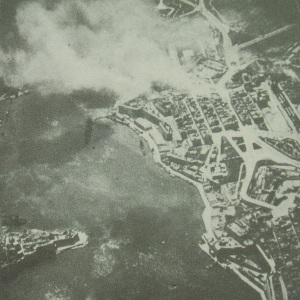 The first ‘Rocket Bombs’ recorded in World War II were dropped on Malta in January 1942 when RE Bomb Disposal were called to deal with an unusual UXB in Floriana. Their report to the War Office in London detailed a new and deadly weapon: a heavily-armoured 500kg bomb, made even more powerful by the addition of rocket propulsion.  The extra thrust was designed to aid the bomb’s penetration of warships and fortifications.

In the air the bombs were a terrifying sight, trailing flames several yards long as they fell.  The reintroduction of these bombs against Malta shows the Luftwaffe’s increasing determination to maximise destruction of all targets.

1122 hrs  53 enemy aircraft come in from the north and drop bombs on the Dockyard area.  A near miss at the north end of Bakery Wharf causes serious subsidence.  Police Quarters, 27 Store and GD Station are rendered unsafe.  Bombs explode on Store Wharf, the Yard Machinery Shop and another tunnel.  A large bomb hits the side of No 2 Dock puncturing the caisson and flooding the dock.  Two large bombs hit No 1 Boiler Shop and Gunmounting Wharf, which is left with a 20 foot crater.  A large number of bombs land on the Dockyard School area: Corrodino Gate is hit and almost every road is blocked.  A large unexploded bomb is reported near Zabbar Gate.

1410 hrs  Four Spitfires 126 Squadron are scrambled to intercept large formations of JU 88s, JU 87s and ME 109s.  The Spitfires make individual attacks:  F/L Johnston probably destroys one ME 109; P/O Putman destroys one JU 88.  P/O Bisley destroys one JU 87 and damages one JU 88 before he is jumped by six ME 109s.  He is injured in the legs and hand, and lands at Ta Qali with his wheels up, from where he is taken to hospital.

1426 hrs  Four ME 109 fighter bombers approach Hal Far from the south.  Two drop bombs causing craters on the aerodrome.  Two are engaged by four guns of 225 LAA Bty: no claims.

2053; 2119 hrs  One enemy aircraft each time approaches from the north and drops bombs in the sea.

2337-0010 hrs  One aircraft approaches from the north and drops bombs in the sea south of the Island as well as other objects which drop more slowly.

0302-0418 hrs  Two aircraft approach from the north: one drops HE and incendiary bombs on Luqa and Gudja, the other drops bombs in the sea.

0513-0605 hrs  One aircraft approaches from the north and drops incendiaries on the Rabat and Ta Qali area.

ROYAL NAVY  Havock sailed at 2000 hrs and ran ashore off Kelibia, being subsequently destroyed by her own crew at 0400 hrs on 6th April.  During raids on Grand Harbour, Abingdon and Gallant were damaged and beached.  Lance received a direct hit while in dock and was blown off the chocks and partially submerged.  Kingston and Plumleaf were also hit and damaged.

1ST BN THE DURHAM LIGHT INFANTRY  A and E and part of HQ Companies on Ta Qali aerodrome.  C & D Companies to commence training on 6th.

8TH BN THE  KINGS OWN ROYAL REGIMENT Working party of 200 Other Ranks and 3 Officers building protective walls for aircraft at Hal Far.

Having changed course frequently in an attempt to avoid detection by the enemy, Convoy MW 10 was unable to reach Grand Harbour under cover of darkness this morning as planned.  Approaching the Island in broad daylight, the convoy of four freighters – Breconshire, Clan Campbell, Pampas and Talabot – and their protective force headed for Malta.  From dawn onwards they were under constant air attack by a determined Luftwaffe.  Malta’s fighters put up a strong resistance against a total enemy force of 62 JU 88 bombers and 25 ME 109 fighters.

Only Pampas and Talabot made it safely into Grand Harbour; Clan Campbell was sunk and Breconshire disabled by Luftwaffe attacks.  Chiefs of Staff have reluctantly concluded that until Malta’s air space is safe no further convoys can be planned.  Without essential supplies, the Island will be unable to feed or defend itself.

PM  There is continuous Ack Ack fire out to sea but owing to bad visibility enemy planes are not visible.

0815 hrs  Talabot comes within sight of land, welcomed by two Hurricane fighters sent out to meet her.  Within half a mile of harbour she is attacked by a ME 109 but undamaged.

0915 hrs  Talabot enters Grand Harbour followed by Pampas, surviving another Messerschmitt attack in which four gunners are wounded.  Word has spread of the convoy’s arrival and cheering Maltese crowd the bastions to welcome the two freighters, with destroyers Kingston and Havock – both damaged yesterday en route to Malta – as they cruise into harbour. 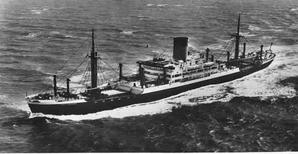 0920 hrs   Breconshire is in sight of Delimara Point when she is attacked by ME 109s with bombs and machine-gunfire.

0936 hrs  A JU 88 aims a bomb at Breconshire which explodes under the ship, stopping her engines.

1000 hrs  Another JU 88 aims bombs at Breconshire, causing further damage.  In the heavy swell, the ship begins to drift.

1100 hrs  Clan Campbell sinks with the loss of her Captain and five hands.  The destroyer Legion is badly damaged.

1200 hrs  Efforts to bring Breconshire into port have to be abandoned: the weather is too rough for towing or disembarkation.  The ship, passengers and crew have to sit at anchor off Zonkor Point awaiting a tow.  One gun and crew of 225 Light Ack Ack Battery is transferred to Zonkor Point to provide protective cover.

HAL FAR  Eight Hurricanes 185 Squadron from Hal Far are airborne on convoy patrol.  Fifteen pilots patrol in pairs from dawn to dusk.  PM  One Albacore despatched on shipping search: nothing sighted.  Owing to bad weather the aircraft landed in the sea.  Pilot Lt Head is saved but two others, S/L Rivers and L/A Tuttle are lost.

2ND BN THE DEVONSHIRE REGIMENT  Seven Officers joint the Battalion from the convoy.

1ST BN THE DURHAM LIGHT INFANTRY  0400 hrs  Duty Officer warned that ‘A’ Company was arriving by convoy early in the morning.  By 1200 hrs two Officers and 40 Other Ranks had joined the Battalion in camp.  The remainder of the Company were on board Breconshire which had stopped ten miles out to sea owing to engine trouble.  The seven Other Ranks killed in the air raid on 21st March were buried in the Imtarfa Hospital Cemetery.

1ST BN THE HAMPSHIRE REGIMENT  Seven Officers arrived in Malta and were taken on strength.

Reviewing the devastation caused by carpet-bombing of Ta Qali over the past 72 hours, Air Officer Commanding, Air Marshall Sir Hugh Pughe Lloyd, concludes that the airfield is likely to be out of action for a week.  Responding to a call from Malta’s High Command, the Army joins forces with the RAF in an all out effort to repair the damage and get the runway operational.  Despite enemy bombing, and a heavy machine-gun attack by a formation of Messerschmitts, working parties labour tirelessly round the clock, and by dusk today the airfield was declared serviceable again.

Malta’s survival is under threat unless the Island gets essential supplies to keep going and withstand the enemy onslaught.  A small, fast-moving convoy of four freighters left Alexandria 48 hours ago with a large cruiser and destroyer escort, in an attempt to run essential items across the Mediterranean.  By 0930 hrs this morning the Italian Navy had closed on the convoy and attacked the escort ships.  Destroyers Havock and Kingston were hit during a day of engagement, before the attackers were beaten off at 1900 hrs.  The convoy is reported as still heading for Malta with its escort, including the damaged destroyers.

1020 hrs  Three JU 88s drop bombs in a line from Luqa to Siggiewi.  One Maryland and one Wellington are burned out, two Blenheims damaged.   Two RAF and two Army personnel are injured.

1145 hrs  B Company, 3rd Bn Kings Own Malta Regiment reports one fighter crashing into the sea off west Bassasa.

1408 hrs  Ten ME 109s carry out a patrol, then swoop down over Ta Qali, machine-gunning the airfield.  Light Ack Ack engage and ground defences return heavy fire, damaging one ME 109.

1410 hrs  Two defence posts of 1st Bn Dorsetshire Regt spot one JU 88 flying low towards the coast and open fire: no claims made.

1733 hrs  Three Spitfires are airborne from Luqa to escort five Albacores.  20 miles from Malta the formation is attacked by two ME 109s.  F/L McQueen attacks one, closing to 50 yards, and sees the ME dive into the sea.

1827 hrs  One aircraft approaches to the north of Grand Harbour, then recedes.  HAA do not engage.

1919 hrs  Three aircraft approach to the north of Grand Harbour, then recede.  HAA do not engage.

1938 hrs  One aircraft approaches from the south east, then recedes.  HAA do not engage.

ROYAL NAVY  Olympus sailed for Gibraltar with passengers and stores.  Five Albacores carried out a shipping sweep without result.  An escort of three Spitfires accompanying the Albacores shot down an ME109.  One Albacore landed in the sea off Zonkor Point: two of the crew missing.  PM  Naval engagement: convoy very heavily bombed; no casualties.  Dark CS 15 returned to Alexandria.  Convoy split and proceeded independently to Malta.

HAL FAR  PM  Five Albacores are despatched to attack an enemy convoy but are recalled.  One Albacore is attacked by an ME 109; no damage.