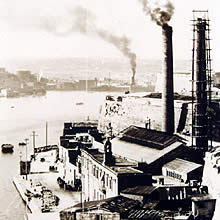 The Stefani news agency of Italy has claimed that Malta “has lost for ever its efficiency for England”, Hinting that military installations on the Island have been destroyed by Italian bombing, the announcement added that “Britain can no longer consider Malta to be one of the strategic bases of the Mediterranean.”  However, the news agency also admitted that the British Government is still using the Island as an aeroplane base.

Hotels are now joining the drive to create more shelters for the public during air raids.  One hotel in Gozo has placed an announcement in the newspaper inviting those without a suitable refuge to make use of its facilities:

“For safety, bedrooms are available at the Royal Lady Hotel, Mgarr, Gozo which has air raid shelter under the rocks.” (1)

1543-1610 hrs  Air raid alert for enemy aircraft which approach the Island in three formations.   Three Gladiators are scrambled and intercept: the enemy turn away to the east without crossing the coast.

0237-0420 hrs  Air raid alert for a series of up to six enemy bombers which approach from the north at five minute intervals over a long period, crossing the coast over Valletta.  They approach either in a steep glide to low altitude or a shallow dive with a slight left rudder at high speed.  They are picked up by searchlights and engaged by Ack Ack fire.  One raider is believed hit.  A third enemy aircraft flies in very low over Delimara.  Bombs are dropped on Valletta, Grand Harbour and Marsa Creek, on Kirkop and Ta Silch, and in the sea off Manoel Island.  The electricity power station is damaged, disrupting the electricity supply.  One delayed action bomb explodes in the Rabat area.

8th Bn MANCHESTER REGIMENT  £216 was today sent to the Malta Relief Fund.  The money was voluntarily collected by the officers, WOs and ORs of the Battalion.