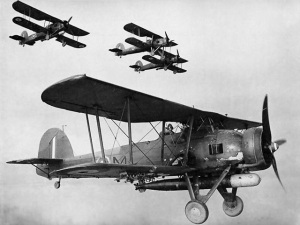 ONE AXIS SHIP SUNK, OTHERS DAMAGED IN CONVOY STRIKE

Swordfish aircraft from Malta sank a 6000 ton Italian steamer loaded with ammunition overnight, as well as badly damaging two other ships. The nine Swordfish took off late last night under cover of darkness on a search for a reported enemy convoy sailing southwards out of the port of Naples.  At just after midnight they located the 6000 ton steamers Andrea Gritti, Riallto, Vettor Pisani, Francesco Barbaro and Sabastiano Venier escorted by four destroyers to the south south east of Cape Spartivento.

The Swordfish released eight torpedoes at the transport ships. Andrea Gritti immediately exploded and sank.  Francesco Barbaro was damaged and taken in tow by the destroyer Dardo to be nursed into the port of Messina.  At least one other of the merchant ships is believed to have been badly damaged in the attack.  All of the Swordfish returned safely to base.

I regret to report that the following military ranks are missing, believed prisoners of war:

1120 hrs  Air raid alert for twelve enemy aircraft which approach from the north east to within 50 miles of the Island. 20 Hurricanes fighters are scrambled but only one of the raiders continues its approach as far as 10 miles off the coast before turning back.  A single fighter then crosses the Island at 16000 feet on reconnaissance.

2315-2336 hrs  Air raid alert for a single enemy aircraft approaching from the north west. No attack is made.  Two Hurricane fighters are scrambled but do not engage.

0040-0115 hrs  Air raid alert for enemy aircraft which approach from the south and drop bombs on the south east of the Island. Two Hurricane fighters are scrambled but do not engage.

0154-0328 hrs  Air raid alert for enemy aircraft approaching from the east. Bombs are dropped on Grand Harbour, Paola and the north of the Island.  Incendiary and high explosive bombs are dropped on the north east side of Ta Qali aerodrome, damaging one Hurricane by splinters and bursting a water main outside the Officers’ Mess.  Bombs are dropped in the Hal Far area, slightly wounding two gunners at a light anti-aircraft gun position; one bomb fails to explode.  Two Hurricane fighters are scrambled but do not engage.

0500-0535 hrs  Air raid alert for enemy aircraft approaching from the north. Searchlights are active in the north of the Island.  No aircraft cross the coast.

ROYAL NAVY  3 Swordfish left for Tripoli and released one torpedo and bombs at a destroyer outside harbor; one hit claimed with a torpedo and one with bombs.

AIR HQ Departures 3 Beaufighter. Blenheim carries out patrol to the north west.  69 Squadron  Photo-reconnaissances of railway east of Tripoli, and Messina-San Giovanni area.  5 Blenheims despatched to attack a convoy. 105 Squadron  5 Blenheims searched for convoy; no sighting. 830 Squadron Fleet Air Arm 3 Swordfish destroyed tanker outside Tripoli harbour and attacked other shipping in area.  2 Fulmars on patrol over Gerbini   and Catania machine-gunned aircraft on the ground at Gerbini and dropped bombs on the aerodrome.  One Fulmar’s petrol tank was pierced by a bullet and it had to ditch in the sea north of St Paul’s Bay; the crew were rescued unhurt.