Any scheme to improve unsatisfactory postal arrangements will be welcomed.  Doubtful whether 55 kilogrammes will suffice to take one card per man per week.  Estimate 70 kilogrammes required if all personnel take advantage of scheme.

In this connection please note that Mideast Air priorities committee have only guaranteed minimum of 50 kilogrammes per machine to include official mail as well as private.  This is quite inadequate.

Suggest that carriage of air letter cards should not be limited to BOAC machines but that advantage should be taken of space in any type of aircraft passing through so that real priority for letter cards can be ensured.  Scheme can not be put into operation until supply of letter cards has arrived.  Estimated weekly expenditure is twenty five thousand.  Please send initial supply by air as soon as possible.  As space is limiting factor installation of airgraph machinery here is again strongly advocated.  Major Randolph Churchill is bringing further details by hand shortly.  This telegram has been agreed by three services.

1205-1207 hrs  One JU 88 approaches from the south east and recedes without crossing the coast, dropping bombs in the sea.  Heavy Ack Ack fires one barrage.

1412-1438 hrs  One JU 88 approaches from the south east under cloud cover at 14,500 feet, dives to 7000 feet and drops bombs on Luqa before climbing away to the east.  One barrack block near the Officers’ Mess is slightly damaged but there are no casualties.  Heavy Ack Ack fires a barrage and Hurricanes are airborne but fail to intercept.

1605-1631 hrs  Two JU 88 approach the south coast, one from the west and one from the south east.  They drop bombs on Hal Far, Tal Papa and near Gudja searchlight station.  Heavy Ack Ack fire a barrage and four Hurricanes are airborne but do not engage.

NIGHT  One raid only by a single aircraft which drops bombs in the sea.

TA QALI  Six air raid alarms during the day; gunfire; no bombs on camp.  Two fighter Blenheims arrived and Pilot Officer and Sergeants 242 Squadron at readiness for the first time.  No scrambles.

NORTHERN INFANTRY BRIGADE  Units of the Brigade found large working parties for work on dispersal areas for aircraft and improvement of runways at Ta Qali and Luqa.  This is to last some weeks.  Average number of men 400.

1st BN CHESHIRE REGIMENT  50 Other Ranks (OR) to Luqa aerodrome, to prepare dispersal areas for aircraft and improve runways. Our party of 12 men attached to Luqa for assisting in preparing aircraft returned today and another 12 were sent.

DESTRUCTION IN CIVILIAN AREAS TO DATE

Figures have been released today of the destruction in civilian communities across Malta. According to statistics, over 2000 houses have been destroyed but the figure masks a much greater impact, as ‘house’ includes apartment buildings occupied by many families.  Even in so-called ‘safe’ areas where refugees have sought shelter have been badly affected.  21 ‘houses’ have been destroyed in Balzan and Lija, 7 in Birkirkara and 5 in Mgarr.

WAR OFFICE SAYS NO TO MORE FORCES FOR GOZO

The War Office has turned down a request from Malta’s Governor and Commander in Chief for additional manpower for the defence of Gozo. The Island was recently named by intelligence sources as the prime landing point for a planned invasion of Malta.  While the importance of this is acknowledged in London, the competing demands for the defence of the Home Front, the Middle East and Malaya precludes the possibility of providing additional forces for Gozo.  Lt Gen Dobbie will have to find resources from his existing military establishment for the defence of Malta’s sister Island.

In reply Lt Gen Dobbie concedes that the naval situation in the Central Mediterranean is turning in the Island’s favour and that the need of other places may be greater than that of Malta. He considers it necessary for Gozo to be defended but can only secure a small force and even that may depend on the situation in Malta.  Any force even part-time would create uncertainty for the enemy, he believes.  Some additional manpower would be required for this.

Malta’s Commander in Chief still believes that Gozo needs anti-tank guns of any available kind, as well as carriers for 1st Bn Kings Own Malta Regiment which has none.  In return, the War Office repeats that General Wavell in the Middle East must take priority for supplies of anti-tank weapons from the UK.  However, he suggests that Lt Gen Dobbie approaches Wavell for up to 24 Italian field guns captured in North Africa or Abyssinia, with ammunition.  According to the War Office, the Italian weapons are believed superior to Allied anti-tank guns.  The carriers for 1st Bn Kings Own Malta Regiment will be despatched immediately.

1124-1155 hrs  Air raid alert for 15 ME 109 fighters which circle to the east of the Island, then cross the coast near Kalafrana before splitting into several formations.  Ten 250kg high explosive bombs are dropped on Hal Far from 15000 feet, damaging three Swordfish and killing two contractors’ labourers.  Seven Hurricanes are scrambled; no engagement.  17 anti-aircraft gun positions engage the raiders with two heavy barrages; no claims.

An almost continuous 5½ hour raid was launched over Malta this evening; the main target was Luqa aerodrome. From 7pm onwards an estimated 30 aircraft approached the Island in waves to launch repeated attacks.  Two Hurricane night fighters were scrambled twice but found no opportunities to engage the raiders.  Searchlights illuminated two raiders and anti-aircraft guns fired six barrages but there were no claims of enemy aircraft damaged or destroyed.

A large number of bombs hit Luqa aerodrome, damaging buildings and aircraft. One hangar was hit by a bomb, one Maryland was also hit and burned out, a second badly damaged and two others slightly damaged.  Water and electricity supplies to the airfield have been disrupted.  Three unexploded have been reported in the area.  Bombs also damages civilian property over a wide area:  40 houses were demolished, four civilians killed and seven seriously injured.

Troops have been reminded that a considerable wastage of petrol may be caused through losses from leaking containers. From now on the motor transport officer of each unit is required to ensure that all deliveries of canned petrol by contractors are carefully examined before being accepted.  All leaking containers should be rejected.  The orders include the reminder that greatest care should be exercised in the handling of petrol containers, particularly 2 gallon ones, which are not designed for rough treatment and are easily damaged.

The Governor and Commander in Chief has recommended to the War Office that 40mm Bofors guns should be equipped for firing against tanks and armoured landing craft as a precaution against enemy invasion. He has requested 3000 rounds of solid shot by the first available convoy.

0905-0915 hrs  Air raid alert for two SM 79 bombers which approach the Island but do not cross the coast or drop any bombs.  Two anti-aircraft gun positions engage; no claims.

0919-1005 hrs  Air raid alert for six unidentified enemy aircraft which approach from the north and patrol to the east.  One JU 88 bomber crosses the Island from Marsaxlokk to St Paul’s Bay and is engaged by anti-aircraft guns; no claims.  Hurricanes are scrambled; one chases a JU 88 out to sea and severely damages it.

0017-0128 hrs  Air raid alert for 15 enemy aircraft which cross the coast at various places from the north and east in a continuous stream, dropping bombs on Luqa and Safi, Grand Harbour and Valletta, and the Tarxien area.  Searchlights illuminate the raiders on two occasions.

0154-0235 hrs  Air raid alert for unidentified aircraft which cross the coast at Marsaxlokk and drop bombs on Kalafrana and Luqa.

1 May 1941: Heavy Increase in Night Raids on Malta 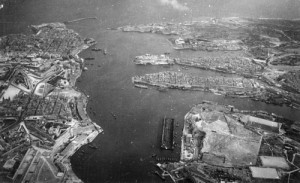 Grand Harbour is a constant target

The month was notable for greatly increased air activity by German aircraft at night, partly due to the arrival in Malta of a convoy and war vessels. There was also a heavy increase in night attacks, both bombing and mine-laying, largely as a result of warships stationed in Grand Harbour and Marsamxetto.  On 21 April heavy bombing of Grand Harbour and the Dockyard area began, gradually increasing in tenacity towards the end of the month. Systematic mining of the approaches to Grand Harbour were also carried out.

There were 42 reconnaissance or offensive patrols in the vicinity of the Island triggering the air alarm, as well as others for which the alert was not sounded. Reconnaissance was usually carried out by a single JU 88 bomber while the escort circled off the coast of the Island.  The escort rarely crossed the coast except when in superior numbers and on specific offensive patrol.  Two daylight and one night dive machine-gun attacks took place: on Luqa aerodrome and Marsaxlokk Bay during daylight and on St Paul’s Bay at night.

At the beginning of the month the policy was adopted of sending Malta fighters up on moonless nights, as well as on nights when the moon was up. The policy was not successful and was quickly discontinued. Searchlights were employed on 15 nights and obtained 47 illuminations.   The firing of predicted barrages at night has been discontinued in favour of immediate barrage procedures.  This has been employed on approximately 140 occasions and has undoubtedly had a deterrent effect on the enemy, causing them to divert from their apparent objective.

0728-0830 hrs  Air raid alert for six to ten ME 109s which circle round the Island. Hurricane fighters are scrambled; one is damaged and another shot down by a raider; the pilot is safe.

1023-1125 hrs  Air raid alert for nine unidentified aircraft approaching the Island. One JU 88 is fired at by anti-aircraft guns at Benghaisa.

1643-1805 hrs  Air raid alert for six bombers and twenty ME 109 fighters approaching the Island from the north at high altitude and head for Grand Harbour. Bombs are dropped in the sea outside the Harbour, believed to be aimed at an A/S trawler.  16 Hurricanes are scrambled and succeed in breaking up the formation of ME 109s which then scout around the coast of the Island in pairs.  One group of Hurricanes is caught in a surprise attack.  One of them is shot down and crashes near Ghaxaq church; the pilot P/O R A Innes is injured but bales out safely.  A second Hurricane is damaged in combat, pilot Sgt Walmsley is slightly injured.

2023-2105 hrs  Air raid alert for thirty enemy aircraft which approach Grand Harbour and lay mines as well as dropping bombs in the area. One Hurricane is scrambled but does not engage.  Anti-aircraft guns fire 16 barrages against targets exposed by searchlights.  Light anti-aircraft guns also engage and claim hits on raiders.  One enemy aircraft crashes in the sea off Salina Bay.

ROYAL NAVY Truant arrived from patrol having sighted various coastal traffic off Tripolitania and sank a caique full of explosives.  Owing to danger from night minelaying, she was sailed for Gibraltar at 2000.  Gloucester and destroyers sailed to attack convoy, but weather was unfavourable and no contact was obtained. Upholder sank two merchant vessels