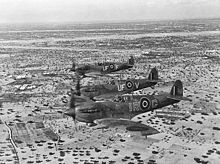 The last two days has seen a metamorphosis in the Battle of Malta.  After two days of the fiercest aerial combat that has ever taken place over the Island the Luftwaffe with its Italian lackeys has taken the most formidable beating that has been known since the Battle of Britain two and a half years ago.  Indeed, in proportion to the numbers of aircraft involved, this trouncing is even greater than the Germans suffered at that time.

It has always been known that man for man, and machine for machine, the RAF were infinitely superior to the Hun, and everybody looked forward to the day when he could be met on terms of parity, for they looked upon the outcome as a certainty.  That day has arrived – the RAF even had numerical superiority over its fighter opponents for the first time – and the results have excelled the most optimistic expectations.  Our fighters have formed, with the A.A. Artillery, a team which has dealt out appalling destruction on the enemy…

Conclusion:  Enemy now moving proportion of air force away from Sicily with consequent lessening of attack.  Reinforcement Spitfires is enabling us hit enemy very hard which may deter from further efforts.

Weather  Strong south easterly wind; warm – no cloud.  In the afternoon a thunderstorm blows up and there is 90% cloud at 10,000 feet for the last scrambles.

0655-0805 hrs  Four Spitfires 249 Squadron are airborne from Ta Qali on patrol  They chase the reconnaissance flight back towards Sicily and run into Macchi fighters.  P/O Plagis engages one, which takes evasive action, stalls and dives into the sea.

1032 hrs  Nine Spitfires 126 and 601 Squadrons are scrambled from Luqa to intercept enemy aircraft.  One ME 109 is probably destroyed; one damaged.

1057-1110 hrs  Only one JU 88 crosses the coast and makes a dive-bombing attack on Hal Far aerodrome dropping nine bombs on the runways.  The aerodrome is unserviceable for one hour.

1635 hrs  One enemy aircraft approaches to within 15 miles of the Island and then turns back.

1725 hrs  Seven Spitfires 601 Squadron are scrambled from Luqa.  Claims: one ME 109 probably destroyed.

1745 hrs  Three JU 88s with fighter escort make a medium level attack on Luqa aerodrome, damaging one Spitfire.  One BR20 and two JU 88s drop eight high explosive bombs and a number of anti-personnel bombs on Ta Qali, causing craters on the aerodrome, damaging two Spitfires and injuring one airman and one soldier.

1805 hrs  Four ME 109s dive bomb Hal Far, dropping bombs at the side of the runway and in the dispersal area.  Two Hurricanes are damaged.

Night  No alerts or raids.

ROYAL NAVY  All sweepers returned to harbour at 0230, except C308. She struck a mine at about 0300 and sank. Seven survivors were picked up by the boom patrol picket boat. The Commanding Officer and eight of the crew were lost. Tug St Angelo detonated six mines.  The Vice Admiral, Malta pointed out that 12 mines had been cut and two had sunk ships in the last few days in the North East approach channel to the Grand Harbour. It was essential that at least two fleet minesweepers should accompany the next convoy and sweep it in.

4th BN THE BUFFS (ROYAL EAST KENT) REGIMENT  Party of one Officer and 20 Other Ranks for filling ammunition belts for aircraft at Ta Qali aerodrome.

1st BN THE CHESHIRE REGIMENT 0500-1000 hrs  Working parties four Officers and 100 Other Ranks standing by at the Addolorata Cemetery for crater filling.