Another Wellington bomber was reported missing this morning following the loss of one aircraft in yesterday’s raid on the Axis airfield at Comiso.  Flight Lieutenant Hayter and his five man crew took off from Luqa yesterday evening at 20:45 hours.  Theirs was one of the first wave of four Wellingtons attacked by anti-aircraft fire.  Two were hit, one was badly damaged; the other, piloted by F/Lt Harper, was reported missing.  F/Lt Hayter returned safely to Luqa at 2225 hrs.

Two hours later he took to the air again, as part of a second-wave attack on the same target.  During the early hours of the morning, his aircraft was shot down over the island above Acate. All of the crew except F/Lt Hayter were killed: he was taken prisoner.

0709 hrs  Formations of enemy bombers with fighter escort are observed approaching the Island.  Four Hurricanes 185 Squadron and two Hurricanes 229 Squadron from Hal Far are scrambled and intercept a formation of JU 88s and ME 109 fighters.  Sgt Boyd damages two ME 109s and F/Lt Lawrence one.  P/O Fletcher damages one JU 88.

0725 hrs  Seven JU 88s carry out a dive-bombing attack on Luqa.  Bombs land on the perimeter of the aerodrome.  One serviceable and one unserviceable Hurricane are burned out.  A photo-reconnaissance Spitfire is damaged.

0810 hrs  Bombs land on the north east outskirts of Zejtun and near Tal Handaq.

1005 hrs  A large plot of enemy bombers and fighters is observed heading towards the Island.

1010 hrs   Four Spitfires 126 Squadron are scrambled from Luqa to intercept.  They attack JU 88s while they are engaged in bombing raids over Grand Harbour: Sgt Christ destroys one JU 87. 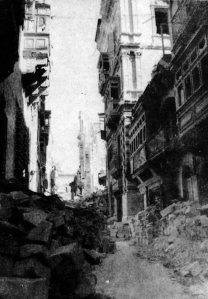 1015 hrs  45 enemy bombers and fighters attack the Grand Harbour area and drop a considerable number of bombs on houses and buildings in Valletta and Floriana.

In Valletta, heavy bombs explode in St Johns Ditch, Hastings Gardens and South Street, killing one and injuring ten.  ARP officers are reported to have collected six bags of human flesh from the ruins.

Several members of 1st Bn Cheshire Regiment are in an air raid shelter in Old Bakery Street when it is hit by a high explosive bomb.  Privates E Jones and F Jepson are reported missing, believed killed.  Witnesses suggest that the bomb landed at their feet, killing both instantly.  Corporal A Johnson is badly injured [he later died of his wounds].  Sergeant Myers and Private Doyle are injured and taken to hospital; Sgt Bollard, L/Cpl Clarke and Pte Leak are slightly injured.

1230 hrs  Three waves of JU 88 bombers with fighter escort (approximately 15 aircraft in each wave) approach the Island.  Two Hurricanes 229 Squadron and one from 185 Squadron from Hal Far intercept the incoming formation.  P/O Nixon, 229 Squadron, damages one ME 109.

1240 hrs  One Spitfire is airborne from Luqa to intercept enemy aircraft: no engagement.

1355 hrs  The lone Spitfire is returning to Luqa when he is shot at by four ME 109s during landing.

1800 hrs  A large number of enemy aircraft is plotted to the north on course for the Island.  They turn towards Grand Harbour: the first formation flying on towards Ta Qali, the second attacking Grand Harbour and Valletta, and the third targeting Msida.  Three Spitfires 601 Squadron are airborne from Luqa to intercept.  They engage several JU 87s and ME 109s over Grand Harbour.  One JU 87 is claimed as damaged.

1807 hrs 15 JU 88s and 19 JU 87 Stukas with a large escort of fighters attack Grand Harbour.  Considerable damage is caused to buildings in Floriana and Valletta, including Casemate Barracks, the Torpedo Depot, the General Post Office and GOR Officers’ Mess.

Three Spitfires are airborne from Ta Qali to defend the aerodrome from the incoming raiders.  F/Lt Lucas has to crash land near Siggiewi due to Glycol trouble.  The other two Spitfires return with R/T trouble.

1840 hrs  An enemy reconnaissance flight is observed over the north of the Island.

2042-2340 hrs; 0155-0210 hrs; 0345-0435 hrs Three air raid alerts are sounded for individual approaching aircraft.  German and Italian bombs, including incendiaries are dropped in the Luqa area, Tal Virtu, Gudjia and Safi.  A few houses are destroyed but there are no casualties.  One Beaufighter is airborne in response to each alert to intercept enemy aircraft: no engagement.

AIR HQ  Arrivals  One Bombay from Gibraltar, one Hudson from Gambut.  Departures  One Catalina, one Hudson to Gibraltar; one Bombay to 108 MU.

LUQA  1150-1343 hrs  One Spitfire on photo-reconnaissance of East Sicilian aerodromes.

1ST BN THE DURHAM LIGHT INFANTRY  Battalion ceased working on aerodromes at Ta Qali and Luqa during the day and began working from 1930 hrs until 0300 hrs daily for seven days a week.  One Other Rank is wounded by a delayed-action bomb and dies of his wounds shortly afterwards.  A detachment from the Battalion took over observation post duties at Tal Minsia for one week.

(1) Compiled with reference to Dover War Memorial Project.  Flight Lieutenant Hayter, Mentioned in Dispatches, was one of the escapees from Stalag Luft III, as recalled in the film ‘The Great Escape’. Hayter one of the fifty recaptured and shot on the direct orders of Hitler on 6 April 1944.