9 March 1942: Germany boasts “Malta under a hail of bombs day and night”

German radio today broadcast the claim: “the Island Fortress of Malta is under a hail of bombs by day and night” as raids continue round the clock.  Luqa received another pounding today with damage to aircraft and runways but the enemy did not escape without losses. Malta’s fighters went on the counter attack, destroying at least three aircraft and damaging ten.  The Island’s anti-aircraft guns also claimed at least one aircraft destroyed and two damaged. 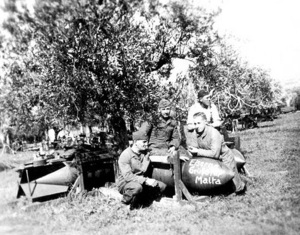 WARNING TO INFANTRY: DO NOT REMOVE BOMB FRAGMENTS

0845 hrs  One ME 109 with a yellow edge and red spinner is seen by 242 Squadron and attacked but it continues to shadow the Blenheim formation.

1040 hrs  Eight Hurricanes from are scrambled from Ta Qali and intercept an incoming raid of three JU 88s and nine ME 109s.

1055 hrs  JU 88s drop bombs between Gudja and Luqa and one bomb in near HQ of 4th Bn Hampshire Regiment.

1120 hrs  The Hurricanes engage the enemy aircraft at a point 20 miles east of Delimara and attack.  One JU 88 is damaged and Wing Commander Rabagliati destroys one ME 109.

1227 hrs  Bombs are dropped at south end of Safi strip: four fires are seen in the dispersal area.

1500 hrs  Six Hurricanes of 126 Squadron are scrambled from Ta Qali.

1520 hrs  Hurricanes of 126 Squadron intercept three JU 88s and six ME 109s off the Island of Filfla, as the enemy are going away from Hal Far.  F/O West damages two JUs.  P/O Hallett destroys one ME 109.  F/O Anderson causes an explosion in a JU and leaves it descending steeply: later confirmed destroyed.  S/L Norris damages a JU causing the engine to emit black smoke.  American P/O Howard Coffin is attacked by an ME and is forced to crash land close to a searchlight position near Gudja, suffering some head injuries: he survives.

1615 hrs  Enemy aircraft come in four waves, each wave dropping bombs onSafi and Luqa.  The first wave is engaged by Heavy Ack Ack.  One JU 88 is destroyed and crashes on Hal Far; one ME 109 is damaged.  An unexploded bomb is reported at Bir-id-Deheb: traffic is diverted and the RE Bomb Disposal squad informed.

1740 hrs  Five JU 88s diving on Hal Far are engaged by 225 LAA Bty. Two guns obtain a direct hit on one JU 88 which catches fire and crashes into the ground.  Two enemy airmen bale out and are taken prisoner by RAF personnel.  Two of the remaining aircraft are claimed as damaged.

1940-2020 hrs  One enemy aircraft crosses theIsland from north to south: believed to be a rescue plane.

Night 9/10th  Continuous air raid throughout the night: bombs in many areas.  Heavy Ack Ack and searchlights are active but night fighters do not engage.

0335 hrs  Four bombs are dropped in the Mqabba area.

ROYAL NAVY  Porpoise arrived from Alexandria with passengers and petrol.  2000 hrs Cleopatra, Penelope and Kingston sailed to intercept enemy convoy.  Three Swordfish and three Albacores attacked an 8000 ton merchant vessel, escorted by three destroyers, in the vicinity of Pantelleria.  Two torpedoes were dropped and the merchant vessel was probably hit.  One Albacore crashed on landing.

8TH BN THE  KINGS OWN ROYAL REGIMENT During the night bombs are dropped 300 yards north of Battalion HQ.  No damage.

225TH LIGHT ACK ACK BATTERY, ROYAL ARTILLERY  Outcome of raids resulted in slight damage to equipment at one gun position, C Troop HQ is damaged, one caravan badly damaged and one billet rendered unsafe.  One unexploded 500kg bomb is discovered 20 yards from a gun position which is evacuated after removal of the gun barrel, auto-loader etc to a place of safety.  The UXB is reported to the RE Bomb Disposal Section.  The BD Officer deals with the bomb and declares the area safe by 1100 hrs next morning.