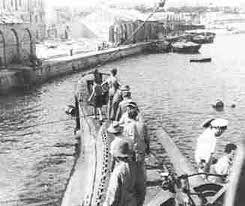 Fuel shortages prevented Malta fighters from fully defending the Island today when enemy raiders attempted a daylight attack. Eleven Hurricanes were scrambled in response to an alert just after 1530 hrs this afternoon, when early warning systems had spotted seven enemy aircraft approaching from the north.  The raiders, identified as Macchi fighters, suspended their approach while still 30 miles from Malta and began to circle, forcing the Hurricanes to fly out to them.  Two of the Macchis managed to evade the Hurricanes and crossed the coast near Grand Harbour.  Several Hurricanes turned back to attempt an engagement but ran out of fuel and had to land.

Fossil fuels are also in very short supply and military authorities are seeking ways to economise. In a bid to conserve supplies, troops have been given new instructions on an economical means of providing fuel using coal dust.

1047-1103 hrs  Air raid alert for three enemy aircraft which approach from the north and carry out reconnaissance. Hurricane fighters are flying into and out of Malta on escort duties so it is not possible for them nor anti-aircraft guns to engage.

1534-1555 hrs  Air raid alert for a total of seven enemy aircraft which approach the Island in three formations but circle 30 miles to the north. The first two formations remain at a distance, while two Macchi 200 fighters approach Grand Harbour from the north east and cross the coast.  Eleven Hurricanes are scrambled at the first alert but, owing to fuel shortages, they are unable to engage the two raiders.  Heavy anti-aircraft guns engage with one barrage; no claims.

0403-0523 hrs  Air raid alert for seven enemy bombers which approach the Island singly from several directions. None cross the coast; all bombs are dropped in the sea, including one container of incendiaries eight miles offshore to the north east.  Four Hurricane fighters are airborne, two at a time, but there are no searchlight illuminations and no interceptions.

ROYAL NAVY Porpoise arrived from Gibraltar and United Kingdom. Ursula, P34 and Rorqual sailed for operations off Kuriat, but Rorqual returned with defects.

1st Bn CHESHIRE REGIMENT  Officers from Battalion HQ and departmental clerks visited the Fortress Telephone Exchange. The amount of call traffic going through was a revelation.  A most interesting lecture was arranged at the Naval Canteen on ‘The Progress of the War’.