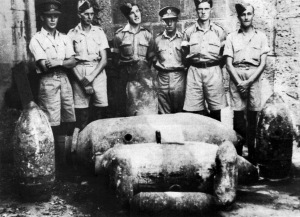 Malta’s Governor and Commander in Chief has written to the War Office requesting additional personnel to increase the strength of Royal Engineers Bomb Disposal to two Sections. The Island currently has a single operational Army Bomb Disposal Officer to deal with all unexploded bombs across Malta and Gozo outside of RAF airfields and Navy premises.  A second Officer is on the Island but is on respite from bomb disposal duties.  The current BD Section consists of 20 other ranks who are not on permanent attachment to bomb disposal but are temporarily seconded from 24 Fortress Company RE.  Lt Gen Dobbie would prefer to have trained and experienced men from the Home Front to create a more permanent establishment for Army Bomb Disposal.

The need for manpower to make up two Sections was first identified following the attacks on HMS Illustrious in January but the shortage of Royal Engineers personnel on the Island meant that the plan was placed on hold.  A Bomb Disposal Section normally consists of an officer and 15-20 other ranks, including those with skills in carpentry, masonry and electrics.

Having been unable to secure the required additional manpower from the Middle East, Lt Gen Dobbie’s has now put in a demand for 52 rank and file Royal Engineers to be despatched from the UK. This will bring 24 Fortress Company RE and two bomb disposal sections up to full establishment and provide some reinforcements for the Fortress Royal Engineers. (1)

Maxims Club in Valletta is to host a dance with cabaret this evening for troops. The Club, at 116 Bishops Street, Valletta will open at 1800 hrs.  A dance band will perform and there will two cabaret shows during the evening.

2138-2228 hrs  Air raid alert for six enemy aircraft which approach the Island singly. Three drop high explosive bombs and incendiaries on various parts of the Island including Rabat, Ta Qali and Hal Far.  Hurricane fighters are scrambled but there are no searchlight illuminations and no engagements.

2313-0017 hrs  Air raid alerts for 12 enemy aircraft which approach the Island singly at intervals. Only two of the raiders cross the coast, dropping high explosive bombs and incendiaries, killing one civilian and seriously injuring three more.  High explosive bombs are dropped between Mosta and Imtarfa, on Ta Qali and Luqa, and on the Bingemma area.  Incendiaries are dropped over Marsa.  Six high explosives fall close to the headquarters of 1st Bn Hampshire Regiment; there are no casualties.  Bombs also land on the road behind the Royal Army Service Corps depot at Rabat used by 4th Bn The Buffs as a billet.  Two Hurricanes of Malta Night Fighter Unit are scrambled to intercept.  Following a formation, one Hurricane spots a light three miles astern and 4000 feet above him.  Climbing at full throttle, he comes into range of the Cant 1007 just after it has passed out of searchlight range.  The Hurricane hits the Cant with several accurate bursts of machine-gun fire, setting light to its port and starboard engines.  The Cant descends quickly to the sea.  A motor launch and a Swordfish rescue aircraft find five survivors who are taken prisoner and brought ashore at dawn.

0442-0454 hrs  Air raid alert for a single approaching enemy aircraft which may have been triggered by a Wellington coming in to land..