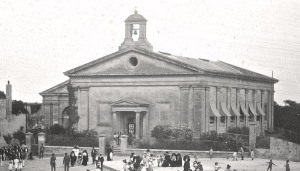 PRAYER SERVICES HELD IN GUN POSITIONS AS WELL AS CHURCHES

Servicemen across Malta attended churches today as the Island observed a Day of National Prayer and Thanksgiving. The special day has been instigated by command of His Majesty King George VI to mark the first Sunday after two years of war.

Malta’s Governor and Commander in Chief issued orders that all servicemen should have the opportunity to be included in the prayers. For troops on duty at defensive positions such as anti-aircraft guns, this meant a specially convened prayer service by their military chaplain.  Roman Catholic troops were given every possible opportunity to attend their local church, where a Catholic chaplain could not attend at their location.

Military authorities have been receiving complaints from farmers about serious damage to the rubble walls surrounding their fields, and also of wholesale theft of fruit by military personnel. Such offences are causing great annoyance to farmers who are dependent on their produce for their livelihood.  Troops have been reminded today that there is no excuse whatsoever for wanton destruction or theft. Commanders will take steps to ensure that any man found guilty of such behaviour will be severely dealt with.

Other complaints have also been received from landowners that civilians are entering fields which are occupied by the military. The civil police have no jurisdiction in the matter, other than in exceptional circumstances.  Troops have been reminded that it is their responsibility to prevent trespass by civilians.  However, it is also essential that owners and tenants be allowed free access.  Where any dispute arises, troops can arrange for the unit compensation officer to assist them in settling the matter.

1st Bn CHESHIRE REGIMENT  A church parade at Barracca Church: the first we have had since the Italians started bombing us in Matruh.

FORTRESS ROYAL ENGINEERS A party of 24 Fortress Company 2 Section working at Cala Mistra is transferred for to reinforce sappers working on aerodrome obstacles at Luqa. The remainder of the Section is working on camouflage for aeroplanes at Cala Mistra.