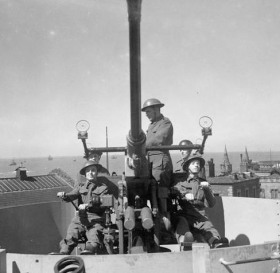 Gunners from the Malta Garrison were sent aboard two merchant ships to help defend the vessels against enemy attacks in the western Mediterranean, it was revealed today. The merchantmen were returning to Gibraltar after delivering their cargoes to Malta last month under ‘Operation Substance’.

In a telegram to the War Office in London, the Island’s Governor and Commander in Chief confirmed that eight-man Bofors gun crews supplied by the Malta Garrison embarked on SS City of Durham on Saturday, and on SS Deucalion yesterday.  The Bofors crew on each sailing was joined by nine other ranks of the Maritime Anti-Aircraft Regiment and three personnel from gun crews of the Operation Substance convoy.  Each of the ships was equipped with two Bofors by Malta Command.

According to radio reports, SS Deucalion was attacked early today by Italian torpedo aircraft.  The Bofors guns were put into action and are reported to have shot down one of the attackers.

A total of 37 unexploded bombs were reported to Royal Engineers Bomb Disposal today. Reports came from areas along a six-mile path from Zeitun, through Marsa and Hamrun to Birkirkara and Lija.  All the bombs were confirmed as 2kg incendiaries.  28 were found in Msida alone and were probably dropped in the same container.  In nearly every case the Bomb Disposal Officer found that the fuze had fired but had failed to ignite the filling.  Teams of his Section are checking each area for additional bombs before removing all the unexploded incendiaries. (1)

2355 hrs  8th Bn Manchester Regiment is ordered to ‘stands to’ at Gozo beach defence posts.  Reports are received on Malta that a number of enemy motor torpedo boats are in the vicinity of the Island.  Malta beach posts are ordered to ‘Stand to’.

0145 hrs  Orders are issued to all posts firing over Grand Harbour to be ready for ‘Stand to’.

ROYAL NAVY  Upholder returned from patrol off Marittimo, having sunk a ship thought to be Italian Fleet Auxiliary Tarvisio, a 2000 ton merchant vessel, and obtained an extremely doubtful hit on a cruiser.