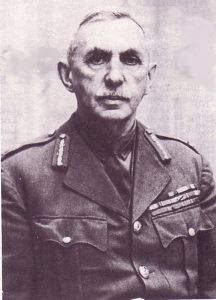 Lt General Dobbie has written a top secret personal letter to the Secretary of State for the Colonies in London today outlining the impact of the recent heavy bomb and mine attacks on Malta and its citizens.

I am very grateful for your message of sympathy for civilian casualties and loss of property in recent air raids. The small number of casualties in comparison with the destruction of buildings is due partly to the movement of population from areas most liable to attack and partly to the increasing provision of safe shelters dug in the rock, particularly in the most dangerous areas.

The outstanding feature of the last month has been the frequent occurrence of night raids by about 40 bombers dropping parachute flares and mines as well as bombs. Damage both from mines and bombs has been widespread but has been greatest in Valletta.  The main street and several others are blocked with great quantities of stone from destroyed buildings and will take a long time to clear with our limited resources.

This extensive damage to their principal city which was founded immediately after the Great Siege in 1565 and has stood unchanged since the time of the Knights has been profound shock to Maltese sentiment and damage to several large churches including the Cathedral of St John has given deep offence. Added to that but separate from it is the material loss caused to large numbers of individuals by the destruction of property and businesses which it has taken them years to acquire.

Nevertheless the reaction of the people is deserving of the highest praise. They have been hardened in anger towards the enemy and are facing their own individual calamities with cheerfulness and fortitude.  With the first light after the destruction of their homes and shops, they are busily engaged with hammers and boards covering up damage where they can and rescuing their stock and possessions from among the debris to make another start.  As one of them recently said after the destruction of his home: “We will endure anything except the rule of these barbarians and savages.”  The homeless are received by others, especially among the poorer classes, with most remarkable hospitality and people in undamaged areas have been living for nearly a year with comparative cheerfulness in conditions of close overcrowding and consequent discomfort.

The great majority are, I am sure, quite unshaken in their belief in final victory and the Prime Minister’s recent statement that Malta will be defended with the full strength of the Empire (maltagc70 7 May 1941) meant very much to the people here.  They ask for retaliation against Italy.  They know that it is the Germans and not the Italians who have done them greatest injury but retaliation upon Germany from England is too far off to give them the same satisfaction that they would derive from retaliation upon Italy whose reaction they could vividly picture whose present immunity so close at hand is a source of lively irritation.  Unfortunately that balm has been for some time lacking.

I am very sure that the people would be greatly heartened by a message from Her Majesty’s Government at the present time. They feel they are sharing in the Empire’s struggle and though they know that their misfortunes are very much less than those of the people in England, they would like it to be known there that they are sharing in that way too.

RIFLE SHORTAGES ACROSS MIDDLE EAST AND INDIA AS WELL AS MALTA

Malta troops face a continuing serious shortage of rifles after the War Office today turned down a request for urgent additional supplies. The Island’s Governor and Commander in Chief has requested supplies of almost 4000 rifles, (maltagc70 17 April) more than half of which are needed to arm new Maltese conscripts.

However, the War Office has replied that there are also serious deficiencies of supplies in the Middle East and India. It is therefore possible to send only 1000 to Malta, which is the maximum currently available in the UK.

1136-1150 hrs Air raid alert for three ME 109 fighters which patrol round the Island.  Their presence suggests the passage of JU 52 transport aircraft north to south off Malta.  Three Beaufighters are sent to investigate; one fails to return.  The other two Beaufighters find no trace of the JU 52s.  A fourth Beaufighter is sent to search for the missing aircraft.  F/Lt J Lowe and F/Sgt J H Tranter are reported missing.

1408-1420 hrs  Air raid alert for a small formation of ME 109s which patrol round the Island without crossing the coast.

1843-1942 hrs  Air raid alert for six ME 109 fighters which approach the Island, split up and patrol at 20000 feet.  One group circles for some time off Kalafrana before one ME 109 dives down and machine-guns a Sunderland at its moorings in Marsaxlokk Bay; the aircraft burns out and sinks.  Hurricane fighters are scrambled and engage the ME 109s, claiming one probably shot down.  Heavy and light anti-aircraft guns also engage; Bofors claim a direct hit on a Messerschmitt.