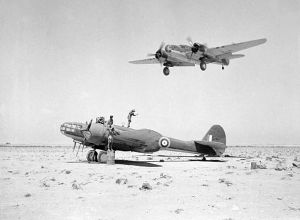 The Independent Company, Special Service Battalion* has been sent to Gozo as part of operation ‘Picnic’.  The codename refers to the military detachment posted to defend Malta’s sister Island, thought to be the destination for an imminent Axis invasion.  The Battalion is specially trained in covert sea to land operations.  They arrived in Malta in January to take part in February’s Operation Colossus, the attempt to destroy a viaduct near Naples.  The Specials’ role was to help transfer the paratroops to a submarine for transport back to Malta. The Company is normally based at HMS Talbot, the submarine base on Manoel Island.

A Glenn Martin Maryland reconnaissance aircraft of 69 Squadron has been reported lost today. The pilot, Flying Officer Frederick R Ainley, was sent out to survey Cape Matapan following yesterday’s sea battle in the area. Information from Greece has confirmed that the Maryland crashed into the sea off the island of Zante, killing the pilot.  One crew member  was seriously injured and the other slightly hurt.

2025-2028 hrs, 2115-2217 hrs, 0037-0352 hrs, 0315-0330 hrs A series of air raid alerts sounds during the night for eight aircraft which come in singly at long intervals. They drop bombs on various localities, including Tarxien, between Rocco and Pietru, on open country near Mgarr and an anti-aircraft position at Tigne causing slight damage and no casualties.  Tactics employed in the last two raids resemble the ‘tip and run’ tactics of Italian air forces.

AIR HQ 69 Squadron 0900 hrs  Maryland despatched on reconnaissance for enemy shipping east of Malta at the request of the Commander in Chief did not return. A communication is received from BAF Greece that the Maryland force-landed at Zante; the pilot F/O Ainley was killed, one crew member seriously injured and the other slightly hurt. 1230-1507 hrs Maryland reconnaissance between Malta and Tunisian coast for enemy shipping.

*forerunner of the Special Boat Service