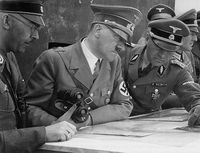 German high command appear ready to invade Malta and confident of success, according to their propaganda machine. According to radio monitors, German wireless has claimed in a recent broadcast that their forces could “take Malta in a fortnight”.

Since German forces have begun moving into North Africa, the Mediterranean sea routes from Italy have become critical to their war effort. Major General Rommel who arrived in Libya earlier this month has reportedly informed German High Command in Berlin that: “Without Malta the Axis will end by losing control of North Africa”

A notice was issued to all military units in Malta today that in no circumstances will any personnel, with the exception of Bomb Disposal Sections, approach unexploded bombs.

Malta’s Air Officer Commanding, Air Commodore Foster Maynard AFC is promoted today to Air Vice Marshal. The enhanced rank reflects the increased role of air operations in Malta, both defensive and offensive.  A New Zealand officer serving in the Royal Air Force, Air Commodore Maynard was appointed as AOC Malta in January 1940.  He previously served in the Royal Navy Air Service and more recently in the Air Ministry before his posting to Malta.

0748-0821 hrs  Air raid alert for six ME 109 fighters which approach and circle the Island. Malta fighters are scrambled; no engagement,

0930 hrs Two Dornier 215s are shot down by fighters. One Malta fighter crashes (cause unknown) but the pilot is saved.