31 January 1941: Malta Must Have Underground Shelters 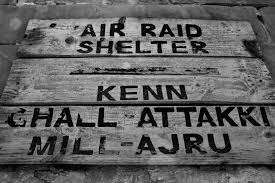 “A hard month has come to an end at last! Fifty-three raids – and what raids!  The night offensives have resulted in a clamour for rock shelters…Volunteers start digging.  Posters appear everywhere to dig, dig, dig.  ‘Wanted: – picks and shovels’ ‘Work one hour a day and be safe’ ‘Dig for victory’.” (1)

Civilians shocked by the severity of recent air raids have begun calling for many more underground shelters to ensure their safety. Many believe that only shelters hewn from Malta’s rock can protect them against the determined dive bombers seen in this month’s attacks.

Malta urgently needs balloon barrages for the defence of the Dockyard, in addition to other air defences, according to the Island’s Governor and C in C. The need was identified in a review of defences during the raids on HMS Illustrious in Grand Harbour.

Lt Gen Dobbie has already applied to the C in C Middle East for supplies but the 25 available there are not considered sufficient to maintain an effective barrage. He has now written to the War Office in London asking for another 25 or so plus accessory equipment to be sent out immediately by flying boat, stressing that the additional protection is really important.

1050-1128 hrs  Air raid alert for four enemy aircraft approaching the Island in two pairs from different directions. Six Hurricanes, one Wellington, one Fulmar and one Gladiator are scrambled.  Four Swordfish and one Glen Martin approach the Island and land safely.  No air raid materialises.

2320-0020 hrs  Air raid alert for two aircraft approaching the Island. They cross the coast and are picked up by searchlights as they circle over the Island.  One is identified as a JU 88 bomber.  Anti-aircraft guns open fire: no claims.  The raiders turn away, dropping bombs four bombs on open land near Grand Harbour and others in the sea off Rinella.

KALAFRANA 23 long patrols were undertaken by Sunderlands of 228 Squadron on 18 days during the month, mainly to observe enemy naval and merchant shipping movements.

8th Bn MANCHESTER REGIMENT  During the month anti-tank mines have been laid on beaches at St Paul’s bay. Beach wire in the Bay was repaired following storm damage.  The Battalion has been called upon to provide blood donors: the number of volunteers greatly exceeded the number required.