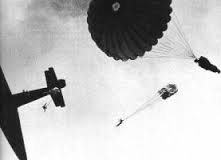 GERMAN PARATROOPERS COULD INVADE FROM SICILY

German forces based in Sicily will attempt to take Malta by landing troops from the air, according to the War Office in London. A top secret telegram to the Governor and Commander in Chief today confirmed that reports of such plans coming recently from Rome are believed to be authentic.

At the same time, the telegram confirms that there is absolutely no evidence as yet of preparations for an invasion operation, and that air forces in Sicily currently constitute the only major German aid to Italy. The same intelligence source reports that the Germans believe significant action is necessary to prevent British and US forces from using Mediterranean and African bases for future operations against the Axis war effort.

MALTA TO TEST BURNING PETROLEUM FOR DEFENCE OF BEACHES

Military chiefs in Malta have been asked by the War Office to test the burning of a petroleum mixture to create a smoke screen as a means of defending the beaches. However, tests have been delayed by a shortage of benzene.

Meanwhile the Garrison’s commanders remain unconvinced of the value of the method. They believe that naval ground mines and scaffolding are much more suitable for the purpose.  However, a supply of these already ordered from the UK have still not arrived and are new viewed as urgently needed.

KALAFRANA  One Sunderland returned from Middle East with passengers.

4th Bn THE BUFFS (ROYAL EAST KENT REGIMENT)  B Company moved into Valletta to defend the town against invasion during the night.