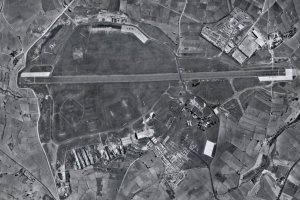 Ta Qali, which lies between Rabat and Valletta, was used as a civilian airfield before the war. Obstructions were placed on the site following the declaration of war by Italy, to prevent airborne landings by the enemy.  These have now been cleared ready for the full operation of the fighter station.

Five Wellingtons from Malta today launched a successful bombing attack on the port of Brindisi, scoring a direct hit on the railway station. Four other Wellingtons attacked Naples, starting fires.

SEVEN IN COURT ON CONSPIRACY CHARGES

Seven young men were charged in court today with “conspiracy and with having secretly distributed leaflets and other seditious matter”. After a trial before three judges, two of the accused were freed, three were sentenced to three years imprisonment, and the other two defendants were sentenced to four years. (1)

KALAFRANA  Sunderland arrived from UK with spares and passengers.

2nd Bn KINGS OWN MALTA REGIMENT  Floating mine reported by detachment at Imtahleb, a few yards from the rockes at Ghar id Duieb. HQ of Northern Infantry Brigade notified.