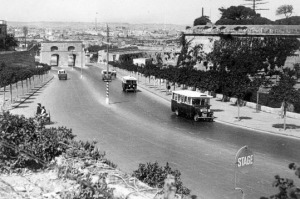 Buses run for only a few hours a day

COINS AND FUEL IN SHORT SUPPLY

“We are much bothered by the hoarding of silver. It is almost impossible to obtain change for half-a-crown. The Government issued an Ordinance making hoarding illegal; but it had little or no effect. Now, another Ordinance has just been issued giving authority to the Police to search houses. But I doubt whether anything will be done…It was said in the Council of Government last week that unemployment is now at its lowest for many years; but the Maltese will oppose any suggestion of Taxation – even self imposed – to the death. There is a lot of money about, and there are many rich people. There is also much real poverty…

We are apparently very short of petrol. For months petrol was not rationed then, soon after Italy came in, private cars were forbidden, but a good many exceptions allowed. Then suddenly all private cars were withdrawn from the roads including taxis and hired cars, and the buses allowed to run during only a few hours of the day. As at least half the population is now living in the country towns and villages, transport is a great problem; and further restrictions are threatened. I should have thought that during those early months the Government might have built storage tanks; but one must not judge without knowing the facts. I am inclined to attribute the sudden panic to Germany’s seizure of Romania. It is even possible that some tankers were just about to start from Galatz for Egypt and Malta and have been held up.” (1)

KALAFRANA  Operations by Sunderland aircraft of 228 and 230 squadrons.

8th Bn MANCHESTER REGIMENT A mine was reported by J2 floating towards the defence post. It proved impossible to beach and the post was evacuated overnight.