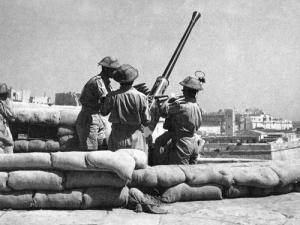 In a report to the War Office today, Governor and C in C Lt Gen Dobbie praised the ‘magnificent work by RAF fighters and steady increasingly accurate fire by Ack Ack gunners’.  Malta’s defenders have destroyed at least eleven enemy aircraft and severely damaged at least eight others since the start of attacks on the Island six weeks ago.  The Governor emphasised that both groups deserved equal recognition for the toll on enemy raiders.  His report is in response to a request from the War Office on the state of morale in Malta.

In 66 bombing raids* since the declaration of war by Italy, several hundred incendiary and high explosive bombs have been dropped, including some of heavy calibre.  The raids, which have featured up to 25 bombers, have been directed at military targets but there has also been damage to civilian property and casualties.  However, these have been reduced since taking cover has become routine.  Low flying machine gun attacks have been made on a few occasions.  Most air raids have taken place by day but some at night.

Despite minimal resources, defensive tactics by RAF fighters have forced the enemy to send large numbers of fighters to escort small formations of bombers.  Italian pilots have also become wary of the Island’s British and Maltese gunners, and now seem compelled to remain at maximum height when flying over the Island.  These successes have helped sustain the morale of the population.

According to the report, all troops in the Malta Garrison, British and Maltese alike, are fit and in a high state of morale, continuing their duties with enthusiasm despite some heavy bombing.  The Royal Navy has maintained regular anti-submarine and local patrols – many of these manned by largely Maltese crews.  Dockyard workers have continued to turn up for work at what is one of the Island’s key targets – and have given excellent service manning their own defence battery.

However, the report sounds a word of caution: that the relatively low impact of the raids so far might cause the Italians to reconsider and intensify their activities against Malta.  And the small scale of the Island means that no area is spared from the danger of continued air attacks.

* Enemy planes have approached the Island on several other occasions triggering an air raid alert but no attack has been made.

AIR HQ  0515 hrs  Swordfish on anti-submarine patrol: nothing to report.