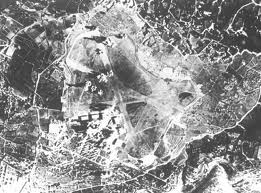 Enemy bombers launch yet another series of raids on Malta’s defences, this time concentrating on Luqa.  36 High Explosive bombs are dropped on the airfield, including two massive 1000kg ‘Herman’ bombs.  Yet again the Island’s infantry battalions are hard at work filling in craters to keep the aerodrome serviceable.  One senior infantry officer looks back on a month of repeated bomb attacks on Malta’s airfields:

“During this month the enemy maintained bombing attacks on the Island with a view to neutralizing the aerodromes…The attacking enemy planes were German and the usual formation was 3 JU 88s escorted by about 9 MEs.  The bombing which was done by both the JUs and the MEs from a great height was very accurate.  The targets have been the Harbour areas, and the aerodromes and [their] dispersal areas.  The line of aerodromes and dispersal areas running from Luqa to Hal Far has had particular attention.  The enemy has been successful in destroying our planes on the ground and occasionally in rendering the aerodrome runways unserviceable for a short period…”  Captain R T Gilchrist, Southern Infantry Brigade

Private R J Pierce of D Company, 2nd Battalion the Devonshire Regiment, is awarded the British Empire Medal (Military Division). His citation reads: “On 15.6.41 an accident occurred in a land mine field in which a number of civilians were injured.  Learning of the Private Pierce proceeded to the scene and made contact with three badly injured persons lying in the middle of the minefield, to whom he rendered first aid.  He remained in the area, acting as guide to the Air Force Medical Officer and his party, and enabling them to avoid the mines.  He then rendered valuable service in removing the casualties.”

1140 hrs  Nine Hurricanes are scrambled from Luqa and land at Ta Qali.

1306-1312 hrs  One unidentified aircraft approaches from the south to within 15 miles, turns eastwards and recedes south. Hurricanes do not intercept.  Heavy Ack Ack do not engage.

1412-1426 hrs  One JU 88 approaches from the west above the clouds and drops bombs on Luqa.  Heavy and Light Ack Ack engage.  Hurricanes do not engage.

2143-0130 hrs  Four aircraft approach the Island singly.  Two are intruders which patrol for returning Wellingtons.  The other two drop bombs on the Safi strip, near Kirkop village, near Rabat, and in the sea.  Civilian property is damaged.  Heavy Ack Ack engage.

0221-0300 hrs  One aircraft approaches from the north and drops bombs between Madliena and Gharghur.  Heavy Ack Ack engage.

0554-0627 hrs  One aircraft approaches from the north and drops bombs between Ta Qali and Rabat, and near Hal Far.  Heavy Ack Ack did not engage as the aircraft stays within an area where gunfire is prohibited.