“Anywhere else but Malta, an air raid warning would sound over a large area as the enemy aircraft moved towards their target; whereas when our sirens sounded, we were the target.” (1) 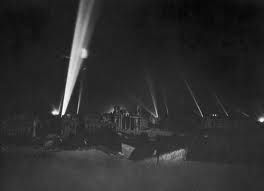 GUNNERS LEFT IN THE DARK

Malta’s defenders are struggling against an increasing numbers of night-time air raids.  The Island is just 27 km long and 14.5 km across.  From the first sight of an approaching raid to when enemy aircraft cross the coast and reach target takes just a few minutes, giving little opportunity for a successful counter-attack.  The Island needs more searchlights, to give the Gunners a better chance of getting enemy aircraft in their sights.

Reasons for increase in AA S/Ls [Anti-Aircraft Searchlights].  Situation here not comparable with UK.  Small area of island with consequent proximity [vital positions] creates gun and fighter aircraft zone in confined space which demands quick pick-up and efficient illumination of many targets, in order to ensure quick results with gun or fighter aircraft in short time available for engagement.

Weather  Rough and cold. Wind westerly.  Rain and hail during the day.

1014-1025 hrs  Three aircraft are scrambled from Hurricane squadrons working out of Luqa.  One aircraft approaches from the north, turns when 30 miles north east of Grand Harbour and recedes.  No interceptions.

1110 hrs  One Hurricane is scrambled from Luqa and four more at 1130 hrs.  One JU 88 bomber approaches from north to south, crosses the Island from south to north at 28000 feet and is engaged by Heavy Ack Ack.  Malta’s fighters do not engage.

1240 hrs  Four Hurricanes scrambled from Luqa land back at Ta Qali: the airfield is now serviceable.

1319-1345 hrs  One aircraft approaches from the north, passes the Island fifteen miles to the east and recedes south.

1352 hrs The previous raid re-appears from the south, is barraged by Heavy Ack Ack as it approaches Kalafrana, and jettisons bombs in the sea.

1400 hrs  The JU 88 attempts to attack Hal Far and is engaged by Light Ack Ack, claiming three hits.  Two Hurricanes of 605 Squadron attack one JU 88 at 10000 feet south of the airfield.  The enemy aircraft is damaged, the rear gunner believed killed.  Both Hurricanes are slightly damaged.  1419 hrs  All clear.

1830-1913 hrs  Four JU 88s escorted by fighters approach from the north and cross the coast near Kalafrana, damaging a slipway and one Sunderland aircraft.  before dropping bombs on Hal Far and the Safi Strip.  Several heavy high explosives and many very small bombs are dropped on the Hurricane dispersal areas.  One Hurricane is a write-off; two airmen are wounded.

1907 hrs  1st Bn The Dorsetshire Regiment reports incendiary bombs in the sea east of Delimara and in area Wied Ta Mazza.  Heavy and Light Ack Ack engage enemy aircraft and several hits are claimed on one JU 88 which is believed destroyed.  Gunner A Beard of 225 Light Ack Ack Battery is injured and taken to No 90 General Hospital.

2024-2045 hrs  One aircraft approaches from the north and is engaged by Heavy Ack Ack, dropping bombs in the Qrendi area and in the sea.

2317 hrs  One JU 88 attacks Hal Far.  Eight bombs are dropped causing craters on the aerodrome and damaging one building.  One Swordfish is slightly damaged.  No casualties.

0300-0325 hrs  One aircraft approaches from the north and drops bombs in the sea just south of the Island before receding north west.

0417-0425 hrs  One aircraft approaches from the north, misses the Island, orbits six to ten miles to the east, drops bombs in the sea and recedes.

1st BN CHESHIRE REGIMENT  B Coy on the range firing Tommy gun: results were not very good on paper but the shortening was not too bad.  The Command photographer took Officers’ photographs for [security] passes.

8TH BN MANCHESTER ‘A’ party from B Company were supplied for a working party at Ta Qali aereodrome.   Brigadier in charge of administration and STO expressed their appreciation of the excellent work done by military working parties in assisting with the unloading of merchant ships of the last convoy.