COMMANDERS REPORT ON A STORMY JANUARY 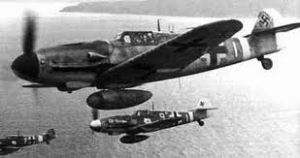 Enemy air activity by day was further intensified in January with 263 alerts compared to 159 in December.  Bombs were dropped on land during 54 raids.  30 or more aircraft took part in 10 of the raids; the heaviest attack – by 72 aircraft – was made on a convoy.

Enemy raiders had a lot in their favour during the month; frequent cloud cover prevented Hurricanes and searchlights from operating successfully at night.  Despite innumerable barrages the Ack Ack fire has had little success in bringing down enemy planes although on many occasions it has caused bombs to be dropped in non-target areas.  Royal Engineers Bomb Disposal have handled 100 reports of unexploded bombs (UXB) in January, and dealt with 50 UXB including 11 High Explosive bombs of 250kg and 21 of 500kg.

Enemy targets were either the Dockyard or the aerodromes and dispersal areas.  There were 36 attacks on aerodromes, evidently to silence Malta’s opposition to Axis convoys of reinforcements and supplies to Libya.  To an extent they were successful, as the largest enemy convoy yet seen in the Mediterranean reached Tripoli.

At the beginning of January the main target was Luqa and at the end of the month Hal Far.  There were also raids on Ta Qali and Kalafrana.  Damage has been extensive and a considerable number of aircraft have been damaged or destroyed on the ground.

Heavy rains renderied Ta Qali and Hal Far waterlogged for days at a time often grounding Malta’s aircraft, restricting offensive operations and preventing fighter scrambles against enemy raids.  Malta’s dispersal areas have not stood up well to the bad weather and enemy bombs have taken a heavy toll of our aircraft on the ground.  However, the Army have provided 2500 men to work on the aerodromes, improving existing dispersal areas and laying additional ones, together with new taxi-ways.  Aerodromes have seldom been made unserviceable through enemy action for more than a few hours.

When Malta’s air forces could operate they proved vastly inferior in speed to the ME 109 and heavy casualties were sustained as a result:

“…our planes are obviously outclassed by the German machines.  The German JU 88 has enough speed frequently to evade our fighters and even when engaged has proved to be so heavily armoured that it is difficult to bring down.  Enemy fighter planes are superior to ours both in speed and manoeuverability.  Our planes lack cannon fire power…Despite this the enemy has by no means obtained his objective of neutralising Malta.”

0812-0834 hrs  Two aircraft approach from the north, pass to the east of the Island and recede.

0929-0947 hrs  Two ME 109s break back from the receding raid, cross the coast near St Paul’s Bay, are engaged by Heavy Ack Ack barrage and recede again.

1218-1302 hrs  Three JU 88s escorted by fighters cross the coast near Rabat and drop 20 bombs from north east corner of Hal Far to the Safi strip, where one aircraft is burned.  A bomb lands near a working party of 8th Bn Kings Own Royal Regt near Kirkop.  Private Gregory is injured in the leg by a bomb splinter and removed to hospital.  Heavy and Light Ack Ack engage.

1359-1406 hrs  One aircraft approaches from the north, turns at 25 miles from the Island and recedes.

1950-2023 hrs  Four bombers come in from the north, three of which cross the coast and drop bombs between Ta Qali and Imtarfa, setting telephone wires on fire, and on the northern end of Luqa airfield.  The remainder drop bombs in the sea before receding.  Heavy Ack Ack fire four barrages.

2138-2158 hrs  One bomber comes in from the north, crosses the coast west of Kalafrana and drops bombs near Zeitun church, and near Ghar Dalam HQ of 2nd Bn The Devonshire Regt. Three more aircraft cross the coast and drop bombs in St Julian’s Bay, Bighi Creek and Msida Creek.  One coal barge is sunk and one damaged.  HMS Sunset is hit by bomb splinters, with several casualties.

2229 hrs  Three bombers approach the Island and drop bombs in the sea.  No Hurricanes are airborne; Ack Ack guns do not engage.

TA QALI  Aerodrome unserviceable.  No scrambles at Luqa.  1905 hrs  Intruder raids by 1435 Malta Night Fighter Unit at night; from Luqa.  F/O Winton attacked a JU 88 over Comiso from 600 yards: believed damaged; had to break off owing to Ack Ack.  Attacked a car later which went into a ditch.  P/O Ruthie did not reach Catania owing to bad weather but attacked stationary motor transport with cannon – probably damaged.  F/Sgt Fowler and W/Cmdr Satchell proceeded on the raid but had to return owing to bad weather.  Operations suspended 0010 hrs.

KINGS OWN MALTA REGIMENT  Lieut Edwin Cafiero, 1st Bn Kings Own Malta Regiment, died after being severely wounded in the accidental explosion of a shrapnel mine on 29th January.  1200 hrs KOMR moved from Tal Virtu area into Wardia area.  Battalion HQ at 36203095.  1935 hrs Mine exploded on the beach off MA1.