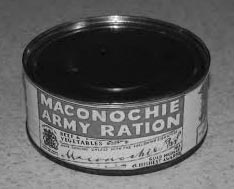 Military rations of key produce have been significantly reduced. Service caterers are facing a reduction of between 30 and 50 per cent in rations of bacon, canned beans, sausages, jam, sugar, cheese, chocolate, margarine and salt.

At the same time, there have been a number of instances of Government rations being found on the open market, according to weekly military orders of the Kings Own Malta Regiment (KOMR). The documents reveal that it is common for Maltese other ranks who are normally fed in the Mess, having been taking with them a share of the week’s unconsumed rations when they go on leave.  It has proved impossible to trace the exact sources of the supplies as they have been made up of a large number of small contributions.

A separate KOMR investigation revealed that the military catering system itself may be open to abuse. It has emerged that in certain messes it is the practice to hand over to the caterer the whole of the issue ration plus some agreed charge per head per dining member.  In consideration of this the caterer undertakes to provide so many meals a day, but then retains for his own use any unused portion of the issued ration.  It is believed that these military rations are also ending up on the open market.

As a result of the investigations, controls on the issue of rations have been tightened, according to the new orders. When soldiers proceed on leave for a period of over 24 hours up to 72 hours their ration allowance should be reduced accordingly.  Rations issued for consumption in the Barracks must be consumed only within the Barracks. In future officers in charge of Companies will see that no rations leave the Barracks, posts or messes.

Severe disciplinary action will be taken in the event of any infringement of the new orders. In addition, anyone engaged in selling military rations on the open market is liable to prosecution.

No air raids. The enemy carried out some patrols off Sicily which Malta fighters twice attempted to intercept; no claims.