ENEMY SHIPS AND E BOATS OFF GOZO AND MALTA

Malta’s defences moved to high alert last night as an enemy cruiser and destroyers were spotted heading towards Grand Harbour from the north east. The first response was to expect a coastal bombardment from the enemy warships.  As soon as they came within 15 miles, the air raid alert was sounded across Malta.

Minutes later a Royal Navy signal station on Gozo reported a flotilla of light craft, possibly E boats, off the coast off the Island’s coast. 1st Bn Hampshire Regiment were immediately ordered to ‘stand to’ ready to implement the Gozo Defence Scheme and repel an enemy landing.  The Scheme was developed as soon as the threat was identified of a possible enemy invasion of Malta via her sister Island (maltagc70, 5 July 1941).  Companies of troops are posted ready to counter enemy seaborne landings at Marsalforn, Mgarr and Cala Dueira.

Five Swordfish of 830 Squadron Fleet Air Arm were scrambled to intercept the enemy ships but just out of range of the coast defence guns, the ships turned away and headed northwards. 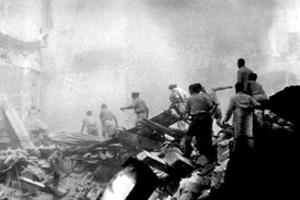 Shoppers in Malta’s capital city Valletta had a shock this morning when an Italian fighter aircraft crashed in the centre of Valletta. The Macchi 200 was one of three fighters and two bombers shot down during a reconnaissance mission.

Some 40 fighters were escorting two bombers sent to review the convoy in Grand Harbour when it was involved in a dog-fight with a Hurricane of 249 Squadron. The Macchi was badly damaged and began to lose height; the pilot baled out but too late for his parachute to open. The wife of Rev Nicholls of St Paul’s Anglican Cathedral witness the fighter crash:

“It swooped screaming over the roof of the Palace over the Casino Maltese missing the top by feet, roared up Kingsway, and buried itself in Brizzi’s already ruined shop – the only blitzed building in that immediate neighbourhood. She was shopping, and finding planes overhead went into Collis and Williams chemist shop. The plane crashed five shops away, exactly 20 yards! Luckily it was not a bomber, and also there were about four walls between her and it.” (1)

As soon as the ‘Raiders Passed’ siren sounded, hundreds of Maltese emerged from shelter and rushed to the scene to celebrate the RAF victory.

1059-1130 hrs  Air raid alert for one SM 79 and one BR 20 bomber escorted by 40 Macchi fighters approaching the Island for reconnaissance at 22000 feet. 22 Hurricane fighters of 185 and 249 Squadrons are scrambled and engage the raiders over Grand Harbour.  Hurricanes of 249 Squadron attack the BR 20 and it begins to emit smoke.  Pilots of 185 Squadron give chase and attack, setting the port engine on fire and further damaging the fuselage.  It is last seen on fire, breaking up and descending towards the sea 20 miles north east of Malta.  Four pilots of 185 Squadron attack the SM 79.  The undercarriage falls and one parachute is seen descending from the aircraft which crashes in to the sea in flames 20 miles east of the Island.

A pilot of 249 Squadron shoots down a Macchi; the pilot bales out but his parachute fails to open properly and he is killed. He is later identified as Sottotenente Francesco Liberti.  The Macchi crashes into the cellar of a bomb-damaged shop in Strada Reale, Valletta.  Two more Macchi 200s are shot down over the sea.  A wounded Italian airman is picked up by the sea rescue services six miles north east of Grand Harbour and taken to hospital.  The body of another is found on land, his parachute only half open.  All Hurricanes return safely.

2235 hrs  A cruiser and destroyers are reported approaching Grand Harbour at 30 knots.

2250 hrs  Light craft of the E boat type are reported off Gozo by the Naval Signal Station on Jurdan.  1st Bn Hampshire Regiment ‘stand to’ ready to move in opposition of any attempted landing as detailed in the Gozo Defence Scheme.

2250 hrs  The air raid alert sounds for three enemy aircraft which drop bombs in the sea, cross the coast and drop bombs on Ta Silch and the Ta Qali area.

2259 hrs  One enemy cruiser and two destroyers together with E boats are reported 14 miles off shore. A warning is sounded on Malta; all beach posts are ordered to ‘stand to’ and depth posts to ‘keep watch’.  A strike force of five Swordfish is sent out to intercept the enemy ships but the vessels apparently turn north east again.

0100 hrs  St Elmo alarm sounds for surface craft approaching Grand Harbour. As they are not within firing range, normal routine is ordered.

ROYAL NAVY  At 2300 an enemy ship was detected and approached to within 14 miles of Malta.

1st Bn CHESHIRE REGIMENT  Beach posts ordered to ‘stand to’ just before midnight due to a report of enemy shipping near the Island.