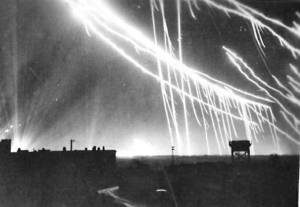 OVER 300 BOMBS TOTALLING 34 TONS DROPPED IN A SINGLE RAID

A massive air raid was launched over Malta’s capital tonight in what is believed is an attempt to destroy the convoy which arrived yesterday. The air raid alert just after sunset was followed by what authorities described as an endless stream of aircraft heading towards the Island.  At least 40 bombers were involved in the raid, including JU 87 dive-bombers, JU 88 and Heinkel HE 111s, as well as accompanying ME 110 fighters.

1st Bn Cheshire Regiment whose job is the defence of Valletta and the Dockyard areas describe what happened:

“Soon after dark Malta experienced what is now known as a ‘blitz’. Many aircraft were over for about 1¾  hours.  A large number of flares were dropped, making the night as bright as day.  Quantities of bombs were dropped, and some mines, a large percentage of which came down on civilian buildings.

Two bombs landed about 20 yards outside our Battalion HQ, and a third landed right in the courtyard, hitting a slit trench, which was luckily empty – and narrowly missing one which was full of men. Other bombs fell in our Company areas but there were no casualties.”

A total of 36 high explosive bombs of 500kg and 333 of 50kg were dropped, 40 houses around the Dockyard and across Valletta were demolished. Ten civilians are reported missing, believed buried under debris, four have been rescued so far, all seriously injured.

0625-0650 hrs  Air raid alert as enemy aircraft approaching the Island and carry out reconnaissance. Eight Hurricanes are scrambled; nothing to report.

1609-1730 hrs  Air raid alert for a large formation of ME 109s escorting one JU 88 bomber approaching the Island from the north. While the fighters circle, the bomber crosses the Island on reconnaissance at 2200 feet.  Eight Hurricanes are scrambled and engage the fighters, while anti-aircraft guns engage the JU 88; no claims.

1810-1840 hrs  Air raid alert for a single unidentified enemy aircraft which circles the Island, probably on meteorological reconnaissance. Four Hurricanes are scrambled but the aircraft does not cross the coast.

2038-2206 hrs  Air raid alert. An endless stream of aircraft is reported heading to Malta from Sicily.  40 enemy aircraft, including ME 110 fighters and JU 88 bombers which carry out a large-scale bombing raid, dropping numerous bombs and mines on the Dockyard, damaging offices and communications and destroying a Sergeants’ Mess.  Flares are used on a moonless night to illuminate targets.  A trawler is also damaged.  Bombs are also dropped on Hal Far, Zurrieq, Safi and Ta Qali.  A Hurricane night fighter is scrambled while searchlights illuminate the raiders but they are too far away for interception.  Heavy anti-aircraft guns engage with 13 predicted barrages and Bofors also engage; one JU 88 is damaged.  One enemy mine is exploded in mid-air.