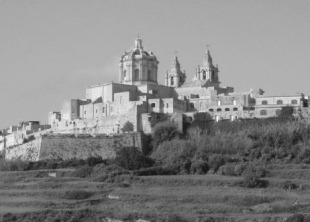 The ‘silent city’ of Mdina

Tonight “will long be remembered in Malta for the widespread indiscriminate night bombing which took place. It will be remembered as a miraculous night for the narrow misses of bombs that were rained down with intermittent intensity over a period of an hour and a half…”

The main attack took place just after midnight and involved 25 enemy raiders which crossed the north coast in a series of waves. One formation dropped bombs on Imtarfa, Mdina and Rabat, where at least 70 craters have been reported.  Other waves attacked Luqa, and coastal points at St Julians and St Elmo.

A large shelter opposite the Lower Barracca suffered a direct hit by two mines, compromising the structures of buildings above the place where a hundred people were huddled for safety. Tons of masonry crashed down but the shelter held out and there were no casualties. (1)

The continuous fire needed to fight off heavy bombing attacks is causing Malta anti-aircraft guns to wear at a rate 20 per cent greater than average. With supplies so difficult to deliver to the Island, The additional wear and tear potentially has serious implications for its defences.  The Governor and C in C Malta has written to military and naval commanders in the Middle East to ask for spare parts to be delivered as soon as possible.

The lack of specialist anti-aircraft personnel in Malta continues to cause concern. Eight heavy anti-aircraft guns are already being manned by non-specialist troops from infantry battalions and continuing manpower shortages mean that four more will soon have to be operated in this way.  The situation is expected to continue for some months.

1006-1116 hrs  Air raid alert for 12 ME 109 fighters which approach along the north coast then break formation over the Island. Hurricane fighters are scrambled and engage the raiders, claiming one ME 109 is probably shot down.  Some minutes later one or two JU 88s cross the coast at Kalafrana and drop bombs on the Luqa area.  Anti-aircraft guns engage and ten Hurricanes are scrambled.  One JU 88 dives steeply in flames and makes a sharp turn out over Grand Harbour.  One ME 109 is destroyed off Wolsey Battery by F/O E M Mason DFC, whose Hurricane which is then itself shot down in the sea by another enemy fighter.  F/O Mason, who is Flight Commander of 261 Squadron at Ta Qali, manages to level out just above the sea, but the engine cuts out. He is rescued the high speed launch and taken to Imtarfa Hospital, where he was found to have bullet wounds in his right arm and left elbow and metal splinters were in his left leg and skull, as well as facial injuries.

2040-2055 hrs Air raid alert for one unidentified enemy aircraft which approaches the Island from the south west, turns in over Gozo and drop bombs at Salina Bay. Anti-aircraft guns engage using predicted barrage; no claims.

2158-2258 hrs Air raid alert for a single unidentified aircraft which approaches the Island from the north and drops bombs on St Elmo Bastion causing some damage and bursting a sewage main. A second raider approaches from the east, crosses the coast near San Pietru and drops bombs in the sea between Kalafrana and fort St Lucian.  Anti-aircraft guns engage; no claims.

0001-0115 hrs Air raid alert for 25 enemy aircraft which approach the Island in a series of waves from the north and cross the coast at various points, dropping bombs on Rabat and Mdina, Imtarfa, Ta Qali, Attard, St Elmo, St Julians and Luqa. Eight civilian houses are demolished. 70 craters are counted in the Rabat area alone.  Signal wire routes at Ta Qali and Imtarfa are damaged, where one office, garages and a barrack block are also damaged.  One Bofors gun emplacement at Ta Qali is damaged but not put out of action.  A landmine falls on the aerodrome, breaking windows, bursting open doors and damaging ceilings of the Station’s HQ and breaking windows in the Pottery.

A bomb falls on the barracks of 4th Bn The Buffs killing one soldier and injuring another.  During the raid two Wellingtons come in to land.  One JU 88 is illuminated by searchlights and engaged by anti-aircraft guns.  Other raiders are also engaged by Ack Ack, using predicted barrage.  Eight Hurricanes are scrambled; no claims.  Three unexploded bombs are reported on Luqa aerodrome.

0556-0715 hrs  Air raid alert for four CR 42 and three ME 109 fighters approaching from the north. They cross the coast at St Thomas’ Bay.   The CR 42s machine-gun Luqa aerodrome, where the Bofors guns engage the raiders.  Hurricanes are also scrambled and a Glen Martin heading in to land during the raid is almost caught in the dog-fight.  The enemy aircraft recede north west; searchlights illuminate several targets and are engaged by anti-aircraft guns; no claims.

1st Bn CHESHIRE REGIMENT  A holiday for all those not required for security; church service at 1115 hrs.