Major General R J Collins has asked the Island’s Governor and Commander in Chief for information on recent incidents in connection with the anti-aircraft defence of Malta suitable for broadcast in his ‘War Commentary’ to be aired on the BBC Forces Programme on Friday 4 April. Lt Gen Sir William Dobbie writes: 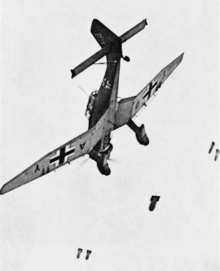 Enemy attacks on aerodromes generally build up in intensity over a period of a fortnight. Firstly a very thorough reconnaissance is followed by a few attacks carried out by two or three high flying bombers protected by fighters.  The culminating point is an intensive combined dive-bombing and low level bombing attack carried out by up to one hundred machines.  This is carried out by a varying number of JU 87s which dive from about 7000 feet and pull out at different heights, some as low as 1000 feet over the target.

This attack is usually followed by a shallow dive bombing by JU 88s from 8-5000 feet. Dorniers and Heinkels sometimes join in and do level bombing from varying heights.  Bombers are protected by a cloud of ME 109 and ME 110s flying at all heights between 25000 and 12000 feet.  There are generally three dive bombing attacks, but the Germans now seem to rely largely on weight of numbers and come straight in, taking violent avoiding action from the moment they are engaged but straightening up for the dive.  Flights do not follow one another in but dive individually from all directions.

The barrage has proved itself to be extremely effective and the toll taken of the enemy by ground defences can be considered more than satisfactory. Our own fighters’ task is to lay off outside the barrage and attack disorganised flights and single planes as they emerge from the attack.  They have been greatly outnumbered but they have shown that individually they can more than hold their own.  These attacks have been watched by crowds of thrilled spectators.  Generally speaking the enemy have been kept from their targets, and many have been brought down by the waiting fighters of the RAF.  One light gun had six bombs fall within 40 yards of its emplacement but continued in action until the attack was driven off.  Another large bomb fell on one of the old fortifications but bouncing twice fell harmlessly into the sea.

The civilian population are standing up to these attacks well. Casualties have not been unduly heavy, though great material damage has been done to civilian property in certain areas.

Night bombing has been carried out on many occasions when a few planes cross the coast at a great height. Surprisingly little damage has been done on these occasions but the night attacks have seldom been carried out in great strength or with great determination.  It appears that they are intended to shake the morale of the people which happily they have utterly failed to do.  Much greater damage has been caused at night by parachute mines intended for the water but dropped on land in built-up districts.

1547-1621 hrs Air raid alert for 16 ME 109 and six CR 42s which carry out a fighter sweep 5 miles off the coast of Malta.  14 Hurricanes are scrambled and anti-aircraft guns open fire; no claims.  An enemy Red Cross seaplane approaches to within five miles of the north coast, possibly searching for a fighter.

1st Bn CHESHIRE REGIMENT  Unloading of convoy ships now completed. Normal work continued on the defences and machine-gun course.  The Royal Engineers are building permanent concrete pillboxes and current sandbag emplacements are being demolished.  It is likely that in the near future we shall be providing instruction to students from the university, so that they may have some knowledge when called up.

One response to “2 April 1941: Luftwaffe Plan to Destroy Malta Airfields”