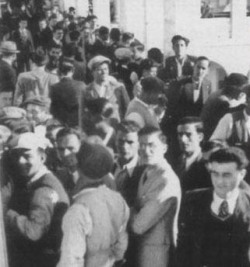 Conscripts line up to register (c) Times of Malta

Compulsory conscription is to be introduced to Malta. Governor and Commander in Chief has submitted a plan by telegram to the War Office in London for urgent approval so that the measure can take immediate effect.  This is the first time since 1792 that the able-bodied in Malta have been called up to defend their country.

Launching the scheme to the media, Lt Gen Dobbie takes full responsibility for the introduction of conscription, which he believes will be approved and welcomed by the vast majority of the people of Malta, who would be glad to see Malta come into line with Great Britain.

The announcement is expected in today’s newspapers that, under the Compulsory Service Regulation, all men between the ages of 16 and 56 will liable to National Service.  Conscripts will not be required to serve outside Malta unless they join the Royal Navy.  Immediate measures will apply to all those aged 20-25 years on 3 March 1941, who will required to register for military service immediately.

Notices will be sent out district by district, calling men to report to their local office. Any man presenting himself for conscription can apply for a postponement certificate on the grounds of hardship.  Exemptions will generally apply to only or eldest sons of the family, and the medically unfit.  Those who fail to attend when called will be liable to arrest by the police. (1)

Families will be protected by the regulations for Army Dependents Allowances in time of National Emergency which will be adapted accordingly. TheGovernor and CiC has also requested approval for the issue of Dependants’ Allowances to Maltese military personnel.

1704-1722 hrs  Air raid alert for two enemy aircraft approaching from the south west. They cross over the Island and fly away over Gozo northwards without launching any attack.