INTELLIGENCE SUGGESTS INVASION MAY BE IMMINENT

German troops and equipment are massing in Sicily, possibly in preparation for an assault on Malta, according to rumours circulating in Rome. The information was passed to the Island’s Governor and Commander in Chief in response to his enquiry about any enemy troop movements in Sicily or en route, which might suggest an imminent seaborne attack on the Island. Malta Garrison was placed on full war routine at dawn today with the issue of the command code ‘Asia’ to all units. 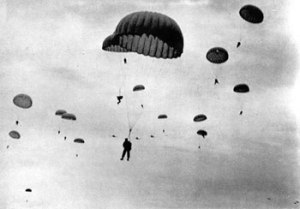 German paratroopers are already in Sicily

We have had many reports of the presence of German troops in Sicily, including parachutists. But the volume of these reports is greater than their reliability which we cannot check and we have received no identification of German formations.  As you know air reconnaissance on 14 January showed no unusual quantity of shipping in Sicilian ports but the possibility of an operation starting from the Italian mainland cannot be excluded, though reports of German troops in Italy are unconfirmed.  At present therefore we have no grounds for believing attack on Malta immediate though possibility exists.  Would be glad to know how you feel as regards garrison to meet attack.

Following most secret report probably comes from MA Ankara dated 20 Jan addressed C in C Middle East: Reports circulating in Rome state that there are 30,000 (repeat 30,000) German troops in Sicily.  These include parachutists and two armoured or motorised divisions with a maximum of 1000 (repeat 1000) tanks and 350 aircraft.  These forces are reported to be destined for landing operations in Malta or in the rear of the British Army in Libya.  We have nothing to confirm or refute this information.

I cannot help thinking that reports are being circulated as bluff. Having consulted the naval authorities here who are satisfied that a suggested landing behind our lines in Libya is out of the question for a force of the nature indicated.  As for its being intended for an attack on Malta, I would point out that armoured or motorised divisions are not suited for such an operation…

Although I would naturally like the full garrison ie three more battalions, yet I am confident that in the existing situation the present garrison should suffice to do the trick. It is big enough to ensure that any attempt contemplated must be a really big one and so may be a deterrent.  What would help us more than anything is the immediate and substantial increase in the number of fighter aircraft with the necessary maintenance personnel – also some additional reconnaissance aircraft of which we are very short at the moment.  We want to avoid surprise and also to resist the heavy air attack which will undoubtedly precede and accompany any other attack.  We would also really like some more gunner personnel of which we are very short of establishment.

Meanwhile, Malta troops remain on high alert with anti-aircraft defence their primary task; extra guns have been issued for the purpose. Anti-parachute look-out posts are also manned from one hour before dawn and throughout moonlit nights.  Additional anti-tank mines have been issued in readiness pending further orders.

2109-2215 hrs  Air raid alert for four enemy aircraft heading for the Island. One Wellington approaches from the south west, gives the correct recognition signal for friendly aircraft, then heads towards Hal Far showing navigation lights.  An unidentified aircraft approaches from the north west.  The Wellington turns off its navigation lights and circles before retreating due south as the enemy approaches.  An enemy aircraft crosses the coast and drops two bombs on land at Zabbar, in the Luqa area and in the sea at St Thomas’ Bay before retreating.  After the all-clear the Wellington lands safely at Luqa.

TA QALI  No 157 Eucharistic Congress Street, Mosta, taken over as sleeping accommodation for officers as overflow from Torri Combo which is now too small.

4th Bn THE BUFFS (ROYAL EAST KENT REGIMENT)  A working party is sent to assist with demolition of dangerous buildings in Senglea.