TROOPS SING “GOD SAVE THE KING” AS THEY MAN GUNS

The Times of Malta reports on the first day at war 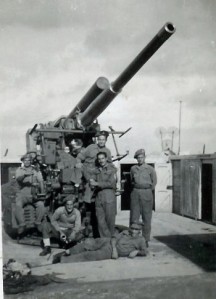 Gunners at the ready

Malta’s defenders are at a high pitch of efficiency and morale is strong among civilians and military alike, reports the Times of Malta today.  On the declaration of war by Italy on Monday evening, all personnel who were not at their posts were recalled to duty and Malta’s defences were fully manned with immediate effect.

According to the Times, when the first air raid sounded yesterday morning, anti-aircraft batteries opened fire against two formations of seven and three enemy aircraft.  As they directed their guns against the raiders, Maltese and English gunners were heard to sing ‘God Save the King’.

One of the targets in the first raid was Hal Far aerodrome, where the accuracy of bombing has given rise to suggestions that pilots had previous experience of flying commercial aircraft to Malta.  The second raid followed the same course of approach, then headed for the areas around Grand Harbour and Marsamxetto.  A crater examined following the raids suggests that bombs used were 250lbs.

The immediate imposition of air raids are a complete u-turn from Mussolini’s much publicised assertions that he would never bomb Malta, says The Times. The Vice Admiral Malta today reported to the Admiralty in London that at least some of the bombing yesterday was indiscriminate. He commented thatbBombing was apparently aimed at military objectives the first raid, but was indiscriminate on the other two.

Workers removing debris from damaged buildings in Gzira today discovered two children in a room beneath piles of debris.  Remarkably, the children were unhurt but were very hungry.

Military units across were placed on alert just before noon today after an American saloon car with a red registration plate 5261 was reported in the area of Marsaxlokk.  The car’s occupants were reportedly giving false information to Maltese citizens to the effect that Italy has declared an armistice with the British Government.  The vehicle is believed to have been one of a number engaged in circulating the false propaganda.

It emerged later that rumours suggested that Italy had ceased fighting due to civil war at home.  Young Charles Grech of Sliema overheard the rumours in a local shop: “At about one o’clock in the afternoon, I happened to be at Tony’s Grocery…when there was a commotion in the street.  I heard drivers tooting their horns and people rejoicing.  A very excited woman entered the shop and shouted, ‘Italy has surrendered…Italy has surrendered.’”  (1)  At the same time a green lorry was also reported spreading rumours in the area of Wardia cross roads.  When approached, the lorry drove off in the direction of Mosta.  The vehicle was later stopped and the driver taken into police custody.

Warnings were issued to all units and police stations to place road blocks across the Island in order to stop the vehicle.  At eight this evening it sped past the block at Ta Qali, refusing to stop.  Several vehicles were added to the watch list during the day, with the instruction that any civilians spreading false information were to be apprehended.  So far no further arrests have been made.

In a later unconnected incident, two RAF officers were challenged by an Infantry post after they stopped their saloon car to take photographs of the post.  After an investigation, it was established that the two officers had recently arrived and were not aware of proper procedures.  The film was removed from their camera and destroyed.

Malta Infantry headquarters have issued orders for personnel to take up attack positions immediately on hearing the air raid alert, and to remain there until ‘raiders passed’, to avoid movement in the open during air raids.  The orders were issued following an incident during an air raid this morning in which troops moved out of their safe position in order to attack low flying aircraft, and suffered several casualties.

All leave has been suspended for Infantry units on Malta today and until further notice.  The announcement from Malta Infantry Brigade was accompanied by procedures for the disposal of the dead during operations in Malta.  The message also informed all Battalions that, after the ‘Raiders Passed’ signal sounds, all normal work must resume.

0820-0838 hrs  Air raid alert for a single enemy aircraft which approaches the Island at 12000 feet.  A bomb is dropped near Garghur, starting a fire.

0919 hrs  One formation of three aircraft is seen flying northwards over Naxxar.

0932 hrs  Three Gladiator fighters take off, reaching 15000 feet.  The raiders circle 38 miles short of Malta and turn back for Sicily; no contact.

1630 hrs  Malta Infantry Brigade issues an alert for the impeding approach of British aircraft, which will be flying at relatively low altitude.   Units are told to hold fire until any approaching aircraft are identified.  The expected arrivals are three Hurricanes and one Hudson.

1820 hrs  Malta Infantry Brigade notifies all units that the British aircraft arrivals are cancelled.  Brigades are also informed that inshore patrols will no longer use navigation lights.